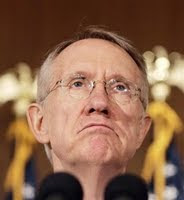 Into retirement. Into the dustbin of history. On a cruise of the Bahamas. To the nearest Target. We don't care. Just go.

The Dems have a technical "majority," but Reid is no "leader" of it.

Tom Daschle was a terrible leader of the Dems when they were in the minority. Harry Reid is much, much worse now that they have their so-called majority.

We're witnessing the squandering of seed corn.
Posted by J.W. Williamson at 10/15/2009 08:32:00 AM
Email ThisBlogThis!Share to TwitterShare to FacebookShare to Pinterest
Labels: Harry Reid