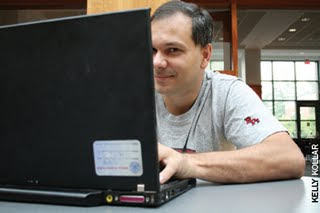 Mike Stark is a royal pain in the ass.

Which is to say, he's a citizen with a video camera not at all afraid to aim the camera at the people's representatives on the public streets surrounding the Capitol and to ask questions.

Of all the members of Congress he might have picked for grilling, can you imagine anyone who would welcome freelance questioning LESS than Virginia A. Foxx? She is sooo terrified of being confronted that she ran from him and called the Capitol police on him. Read about it here.

The woman needs psychological help. To run for public office and fear the public this much, to say the outrageous things she sez and not to expect a little cross-talk, to make oneself as notorious as she's managed to make herself without being able to take any heat whatsoever ... why, isn't that evidence of a deep-seated bad self-image?
Posted by J.W. Williamson at 10/15/2009 09:21:00 AM
Email ThisBlogThis!Share to TwitterShare to FacebookShare to Pinterest
Labels: Mike Stark, Virginia Foxx