The Gang That Can't Shoot Straight 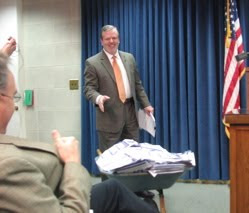 That's Republican Senate Leader Phil Berger with a wheelbarrow load full of "voter surveys" which he later delivered to Gov. Perdue's office to show just how displeased North Carolinians are with Democratic rule in the state.

1. The questions were asked only of "conservative Republicans," and the questions were just a smidge prejudicial. Sample: "Do you think death panels made up of government bureaucrats should decide if your loved ones live or die?" Wait! Let me think about that.

2. Phil Berger himself did not know what was in those envelopes, because apparently neither he nor his minions had bothered to open them and read the contents. Well, the governor's office did open them and found a few surprises. By late yesterday, an aide to the governor had opened about a third of the 3,000 "surveys" and found (among other things) a check made to Phil Berger for $50 (unclaimed and uncashed) and a few comments suggesting that all of those "conservative Republicans" are not all that happy with the North Carolina Republican Party. Such as ... "I am embarrassed to be associated with this organization. Your tactics are disgusting and you're going to lose a generation of voters" and "Stop wording questions so geared up to get the answers you want and start wording them to actually find out the people's opinion, not just confirm your own. There are probably only three questions on here that are legitimate" and "Not sending you any more money."

After "Under the Dome" spilled these latter beans, a self-identified Republican posted a rueful comment, comparing the NCGOP to Wile E. Coyote and the Democrats to the Roadrunner:

We just cannot seem to catch up with the Dems. We're comfortable being bumbling idiots. Nothing ever works out for us politically. We would be in a mess if we had not been born rich.