Dick Burr, Wrong for N.C. in So Many Ways 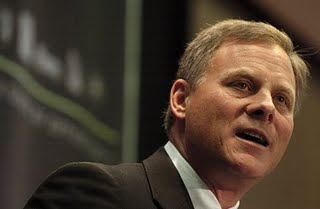 The Senate Guru lists "Eight Ways Richard Burr Displayed Poor Judgment, a Lack of Integrity, and Utter Contempt for Others." Let us recite some of the ways:

Promised he would vote for an additional $2 billion, money already appropriated in the American Recovery and Reinvestment Act, but then voted "nay."

It's just a basic fact that women have more "pre-existing conditions" than men. Whattya gonna do?

Voted against President Obama's stimulus plan as "wasteful" spending, then shows up for the photo op and takes credit when money gets handed out in N.C.

Everyone's most memorable Burr is the Burr with inside knowledge about an impending bank crisis who was generous enough to let all us ordinary people know about it. No, wait. This is the Burr who sent his wife to grab what she could before the rest of us depleted the cash pool.

There is more in this vein at Senate Guru.

The most recent and perhaps the most outrageous example was Burr's vote against the Franken amendment to a defense appropriations bill that would ban federal funds going to companies (like Halliburton) that require arbitration in the case of sexual assault, rather than allowing a raped woman to seek redress through criminal court proceedings. The measure passed 68 to 30 with all the Democrats and all the Republican women voting for the Franken amendment. Burr was one of the 30 Republican men who were much more concerned about protecting no-bid contractors than protecting the rights of women.

Glad to see Elaine Marshall out this a.m. with a statement condemning this last vote by Burr. Meanwhile, Burr is scrambling to explain it all away, kicking up a small cloud of dust that the amendment doesn't really do women any good and, by the way, some of his best friends are women.
Posted by J.W. Williamson at 10/21/2009 08:59:00 AM
Email ThisBlogThis!Share to TwitterShare to FacebookShare to Pinterest
Labels: Elaine Marshall, Richard Burr