Some Car Wrecks Are More Fatal Than Others 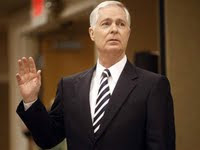 It had to be a cringe-inducing moment for members of the State Board of Elections yesterday, meeting this week to hear testimony and decide whether former Gov. Mike Easley flagrantly (or only innocently) violated campaign finance laws.

From Mark Binker's eye-witness account, as the former Guv settled into the witness chair yesterday for almost five hours of motor-mouth self-explanation, he said to the members of the Board who will decide his fate, "Before we go any further, I do want to say I appreciate the board serving. I know it's an inconvenience and I know it doesn't pay that well. But I do hope since I had the privilege of appointing some of you on to say thank you for the service."

Would that not make your toes curl if you'd been appointed to the state Board of Elections by this man? Would you not wonder whether he was really saying, "Lookee here, Bucko, I gave you this job, so you'd better do right by me"?

In other words, AWK-WARD.

Chris Fitzsimon has a thorough summary of the whole scene that's worth reading.

The ex-Guv's "tell" was his general demeanor ... the famously anti-social Easley was all Junior-League smiles and air-kisses, hand-shaking with everyone in the room, back-slapping, striking a wholly unconvincing pose of "nothing to see here, and butter will never melt in MY mouth."
Posted by J.W. Williamson at 10/29/2009 12:34:00 PM
Email ThisBlogThis!Share to TwitterShare to FacebookShare to Pinterest
Labels: Mike Easley