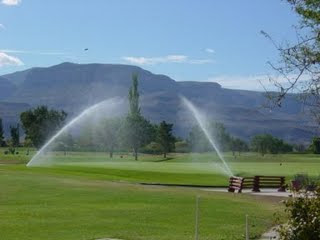 In 2002 the state of North Carolina was experiencing a major drought, "the worst in a century." Gov. Easley first solemnly requested that citizens "turn off the faucet when brushing their teeth," then issued a directive that local water systems and businesses "take quick steps to reduce their water use by 20 percent." Before the crisis began to end, Easley directed all state agencies to stop "nonessential" water use, including grass watering, saying the state should "lead by example."

While all this was going on, the N&O reveals this morning, the governor or the governor's office (you know how vague these lines of responsibility become!) was also pulling strings to make sure that The Guv's private golf club in Chatham County got access to some 6 million gallons of water to keep those golf greens nice and vibrant.

The details of how those strings were pulled, you can read for yourself, but it's very clear that the comfort of the 300 rich members of the Old Chatham Golf Club (monthly membership dues: something over $500) was a good deal more important than the drought. Let the little people conserve water! The good ole boys need the green. (It's fairly edifying, too, to read the Old Chatham Golf Club website, especially the page devoted to the exclusivity of the membership, which included, only incidentally, NC Senate Honcho Tony Rand.)

Wanna know the icing on this particular Devil's Food cake? Easley got his membership FREE, and he didn't bother to report that benefit on his financial disclosure forms.
Posted by J.W. Williamson at 10/18/2009 10:54:00 AM
Email ThisBlogThis!Share to TwitterShare to FacebookShare to Pinterest
Labels: Mike Easley, Tony Rand, water resources