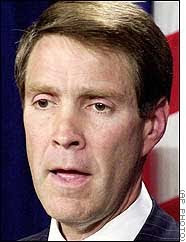 Ex-Senate Republican Majority Leader Bill Frist, safely out of office so that he can prevaricate at will about what he would have done, told Karen Tumulty of Time magazine that he would vote for the Democratic health-care reform bill (whatever that ultimately turns out to be): "As leader, I would take heat for it .... That's what leadership is all about."

If you can suppress your gag reflex long enough, recall that this is the same senator who confidently diagnosed Terri Schiavo's condition from hundreds of miles away and led the U.S. Senate on a midnight charge to interfer in a private family's decision, all in the interests of "right-to-life" politics.

If Bill Frist were still in the U.S. Senate, he would be talking daily to the microphones about "Obama's socialized medicine," ululating like a Swiss goat-herder yodeling in the Alps.
Posted by J.W. Williamson at 10/04/2009 12:23:00 PM
Email ThisBlogThis!Share to TwitterShare to FacebookShare to Pinterest
Labels: Bill Frist, health care