City of Concord, A-Feared of Chickens 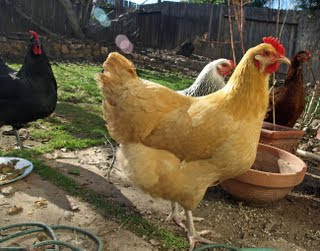 We just heard about this nonsensical piece of September news. The city of Concord, NC, petitioned by a group of residents who are advocates for "eating locally," refused to amend city ordinances to allow a homeowner to keep up to six laying hens in her backyard for fresh eggs.

The Concord Chicken Club had proposed very strick rules to placate nervous city officials: no breeding of chickens, no chickens raised for meat, no crowing roosters.

The request went first to the Concord Planning and Zoning Commission, which bwak-bwak-bwaked for an hour, split pretty much down the middle, but voted narrowly against allowing laying hens: "The commission expressed concerns about the appearance and structural integrity of the henhouse, permitting enforcement and waste management." A tremendous case, it appears to us, of getting a non-existent piece of grit caught in their craw.

The issue then went to the Concord City Council, which split 2-3 against Henny Penny and her sisters. Only one person spoke against chickens at the public hearing, stating that they "would decrease the quality of life in Concord." One of the three-person majority on the City Council who decided to continue the ban on hens said he didn't think they were best "for the city as a whole."

"This is not just an issue of chickens. The planning and zoning commission gave us a negative recommendation," he said. "It's up to us to say what is best for the 80,000 citizens of Concord."

Beware of homegrown food is now the official doctrine of the Concord City Council. Reminds us of the NC Senate: There will be no wind-generated energy on mountain ridges.

The only (chicken) bone we have to pick with the Concord Chicken Club is the "no roosters allowed" provision in their proposal. What's a sunrise for, if not to give a boastful Rhode Island Red mister-man his opportunity to challenge the sun?
Posted by J.W. Williamson at 10/04/2009 11:39:00 AM
Email ThisBlogThis!Share to TwitterShare to FacebookShare to Pinterest
Labels: Concord, local foods movement, NC