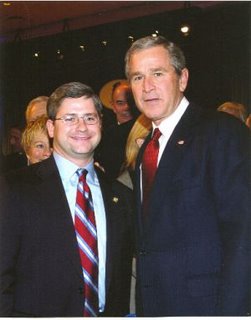 Four-foot-one-inch Congressman Patrick McHenry has loaned himself $175,000 to keep his campaign for reelection in the NC-10 on life-support.

"McHenry spokesman Brock McCleary said the loan shows the Cherryville Republican is 'willing to make a personal investment in his fight for good jobs and lower gas prices for North Carolina.' "

That's a slippery slope the Lit'lest Angel has bravely stepped out on (just ask Hillary Clinton). But whatta ya gonna do? Fundraising goes dry, your opponent (Daniel Johnson) is coming on strong, scandal stalks you like a pregnant thought, key members of your own party in your own district hate your guts...

It's not the number of zeros on the check. It's how you spend the money, Congressman.
Posted by J.W. Williamson at 7/22/2008 09:06:00 AM
Email ThisBlogThis!Share to TwitterShare to FacebookShare to Pinterest
Labels: Daniel Johnson, Patrick McHenry