Sometimes the Jokes Just Write Themselves 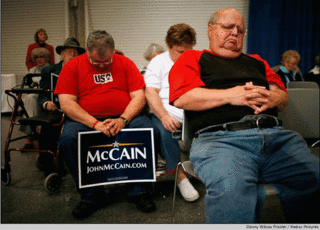 [Watauga County Republican Party Chair Jim] Goff said the party's mood was good, despite not having any county commission candidates, and the party was stronger after its local defeats in 2006. "There doesn't seem to be any local issues inspiring people enough to put themselves out there," Goff said, adding that some were content with the county's direction but others were opposed but didn't want to get involved this year. "In the end, I'd rather we not have candidates than those who didn't really want to run."