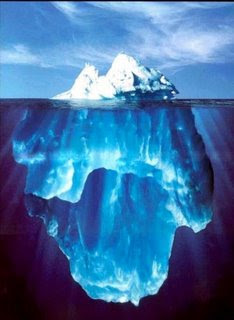 Apparently, if you've got enough political mojo, you can find an economist to predict whatever you want predicted, which perhaps accounts for all that continuing willful belief out there that the economy is actually just hunky-dory, and if we say or (heaven forbid!) THINK differently, we're WHINERS or off our friggin rockers, so we're not supposing here that the economic analysts cited below are any more infallible than the Bush Team of Certified Geniuses, but still. Some smart people think we're in deep doo-doo and that Republican economic policies are largely to blame, starting with their deregulation of the mortgage industry.

John Mauldin, for example. He seems to have predicted the housing bubble back in 2005, and now he's predicting the largest credit contraction in DECADES (he uses all caps too), based on projections that there are another $1.6 TRILLION in bank losses (world-wide) yet to come, "four times official estimates and enough to pose a grave risk to the financial system."

In other words, IndyMac in California and Fannie Mae and Freddie Mac are the tip of a very large iceberg.

Large and unpredictable enough to cause Treasury Secretary Paulson to say last Thursday that "no bank is too big to fail. That is for public consumption." Large and unpredictable enough even to cause John McCain to change his tune, abandoning Republican boilerplate gospel (no government intervention), which he was still spouting in May, to his blind staggers of last Thursday following Secretary Paulson's dire warning: "Give us government bailouts. Please!"

"And, by the way, please put me and my slavish adherence to Bushonomics in charge of your economic futures. I promise to be as sunnily clueness as our last schmo."
Posted by J.W. Williamson at 7/14/2008 09:06:00 AM
Email ThisBlogThis!Share to TwitterShare to FacebookShare to Pinterest
Labels: bank failures, Bush economy, John McCain, mortgage crisis