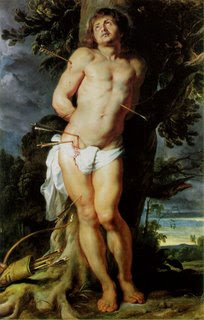 So there was Bob Schieffer baiting Gen. Wesley Clark on CBS's "Face the Nation" Sunday morning:

Bob Schieffer: Well you, you went so far as to say that you thought John McCain was, quote, and these are your words, "untested and untried," and I must say I, I had to read that twice, because you're talking about somebody who was a prisoner of war. He was a squadron commander of the largest squadron in the Navy. He's been on the Senate Armed Services Committee for lo these many years. How can you say that John McCain is untested and untried? General?

To which Wesley Clark replied:

GENERAL WESLEY CLARK: Because in the matters of national security policy making, it's a matter of understanding risk. It's a matter of gauging your opponents, and it's a matter of being held accountable. John McCain's never done any of that in his official positions. I certainly honor his service as a prisoner of war. He was a hero to me and to hundreds of thousands and millions of others in Armed Forces as a prisoner of war. He has been a voice on the Senate Armed Services Committee, and he has traveled all over the world. But he hasn't held executive responsibility. That large squadron in Air-- in the Navy that he commanded, it wasn't a wartime squadron. He hasn't been there and ordered the bombs to fall. He hasn't seen what it's like when diplomats come in and say, "I don't know whether we're going to be able to get this point through or not. Do you want to take the risk? What about your reputation? How do we handle it?"

If we can read English, Gen. Clark said

1. He honors McCain's service as a prisoner of war
2. McCain is a hero to hundreds and thousands and millions
3. That doesn't automatically confer on him the ability to be president

Which is demonstrably, irrefutably, and transcendentally true.

The only way this can be used to question anyone's patriotism is to demand that the plain honest truth must not be spoken near any candidate wrapped in a bloody flag. The whole flap has mainly served to underline that John McCain really doesn't have much to offer beyond the aura of victim.
Posted by J.W. Williamson at 7/01/2008 09:13:00 AM
Email ThisBlogThis!Share to TwitterShare to FacebookShare to Pinterest
Labels: John McCain, Wesley Clark