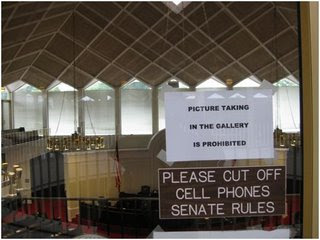 Adam Searing over at The Progressive Pulse thinks that he personally might be the reason for a new sign that went up on the visitors' gallery door at the NC Senate chamber in Raleigh this past week (photo courtesy of the same site) ... "PICTURE TAKING IN THE GALLERY IS PROHIBITED."

Writes Searing, "A short video I did a few weeks ago criticizing the Senate for attempting to close NC's affordable children's health insurance program included some footage of [a certain] type of oration," which is to say, oration that was sometimes fact-challenged, maddeningly complacent, and occasionally tinged by personal prejudices.

Searing continues, "I understand the fears of the Senate. The thought that anyone might be held to account for what they actually say is terrifying, especially if they feel what they say is taken out of context. Unfortunately, explaining what you said and what you meant to the people back home is just part of the job of being a politician."

A job that the Senate leaders obviously don't relish.

We note that some readers of Searing's post are calling for civil disobedience in the face of this new, wholly arbitrary "rule," a course of action we would devoutly endorse. Let a thousand YouTubes bloom!
Posted by J.W. Williamson at 7/13/2008 12:14:00 PM
Email ThisBlogThis!Share to TwitterShare to FacebookShare to Pinterest
Labels: Adam Searing, North Carolina Senate