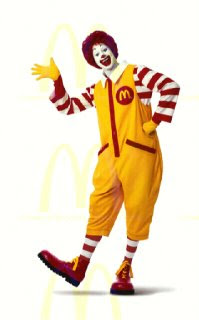 Well, it IS Independence Day, after all.

You NEVER see Ronald McDonald on a date with a woman. It's true. We always thought the outfit was a trifle ... flamboyant.

The American Family Association (AFA) has announced a boycott of McDonald's because some Vice President in Charge of Charbroiling is serving on the Board of Directors of the National Gay & Lesbian Chamber of Commerce.

So now they have their own Chamber of Commerce? Cool.

The AFA (otherwise known as the Rev. Donald Wildmon of Buttlump, Ala.) "has a long history of silly, offensive boycotts against, among others, Wal-Mart (for selling Brokeback Mountain DVDs), Ford Motor Company (for advertising in gay-friendly publications), and the American Girl dolls (because the maker contributed to a youth organization that was pro-choice and supported the acceptance of lesbians). In 2005, it called off its unsuccessful nine-year boycott of Disney (for its 'embrace of the homosexual lifestyle')."

Americans can be SO nuts.

And simultaneously so immune to the whims of Rev. Wildmon and the AFA.
Posted by J.W. Williamson at 7/04/2008 02:55:00 PM
Email ThisBlogThis!Share to TwitterShare to FacebookShare to Pinterest
Labels: American Family Association, Donald Wildmon, queer fear