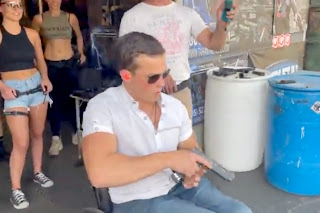 Ex-Congressman Madison Cawthorn's lawyers are due in a Mecklenburg County courtroom this morning to answer the charge that last April their client brought a loaded 9 mm Staccato handgun in his carry-on and tried to board a flight at Douglas International Airport with it.

Not the first time Mr. Cawthorn pulled that stunt. He had been caught by the TSA with a Glock 9 mm in his carry-on trying to get on a flight in Asheville in July of 2021. That gun was unloaded at the time, but his bag did contain a loaded magazine. The Glock was confiscated but was later returned to Cawthorn.

Appears that $15,000 might be the maximum possible fine for this second infraction.

Posted by J.W. Williamson at 1/13/2023 09:37:00 AM
Email ThisBlogThis!Share to TwitterShare to FacebookShare to Pinterest
Labels: Madison Cawthorn

What is a 'Staccato handgun'?