Republican Bosses in NCGA Think Women Will Just Take It 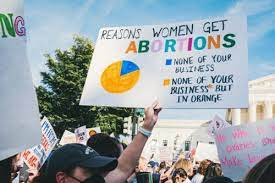 Multiple articles appearing right now warning us that secret groups of Republican lawmakers in the NC House and Senate are crafting new limits and restrictions on abortion, to be sprung in the General Assembly this spring. Here's one such article.
North Carolina Republican lawmakers are, if nothing else, as tediously predictable as the return of spring ticks, once the weather warms. They're marching in the same rut -- driving down women -- that Republican majorities in other state legislatures are, making new law to restrict women's rights. In NC, Berger/Moore don't think they can ban abortion outright, like in Alabama, but by Gawd, they can make it harder -- "it" being a private medical decision.

And why shouldn't Berger/Moore cinch the chastity belt tighter? The last election proved to them that they can be as mean and cruel, do their worst with the social safety net, and still come out ahead with voters. NC Republicans won seats last November. They've now got a veto-proof majority in the Senate, and they're just one vote short of that majority in the House. Plus in other news, North Carolina voters opted for an anti-abortion, chuckleheaded good ole boy for the US Senate, and they gave a rabidly conservative Supreme Court chief justice a solid majority to rule Republican legislation "constitutional" in the near future. The 19th Century has never looked better nor seemed more attainable!

Will North Carolina women (and the men who recognize them as equals) stand for this? Do we tolerate the forcing of religious dogma onto the levers of State power? Dunno the answer to that. I've learned the hard way that you actually can underestimate the capacity of ordinary people to accept punishment they don't deserve.

The Republican leadership in Raleigh seems to think they've got one or more Democratic weak links in the NC House who'll vote to override Gov. Cooper's inevitable veto of an abortion bill. Rep. Garland Pierce, who represents Scotland and Hoke counties, is one of those possible Democratic votes. He's been in the General Assembly for two decades, entrenched in a safe district. (I checked: during all the Republican gerrymandering of districts in the last several years, Republican map-drawers have left Garland Pierce's 48th House District strictly alone.)

He’s a Baptist minister and army veteran and sided with Republicans on the 2019 bill [Born-Alive Abortion Survivors Protection Act] and 2021 bill [Human Life Nondiscrimination Act]. When commenting on the born-alive bill after Cooper vetoed it, Pierce said he “decided to side with the surviving baby.” He then voted to override Cooper’s veto, a move that ultimately failed. [Ah! The good ole days when it took more than one Democratic vote to override a veto.]

Pierce also voted for HB2, the notorious trans-persecution law. I'm afeared of several things. High on the list is theocracy, and the authoritarianism ("Thou shalt not!") that comes as a side-dish for some religious dogmas.

Incidentally, the Republican bosses in the NC House have also just changed their own rules and eliminated the "notice of veto-override," thus tacitly promising to call on Garland Pierce's vote to override a veto on new abortion restrictions suddenly and without notice, like while just one pro-choice Democrat is absent or Rep. Deb Butler goes to the restroom. That's the dishonest sneakiness we've come to expect from Berger/Moore. And apparently accept, if last November's Democratic performance is any indication.

Posted by J.W. Williamson at 1/15/2023 09:45:00 AM
Email ThisBlogThis!Share to TwitterShare to FacebookShare to Pinterest
Labels: abortion rights, Garland Pierce, religion and politics