Dark Horse Candidate for Speaker of the US House ... Patrick T. McHenry??? 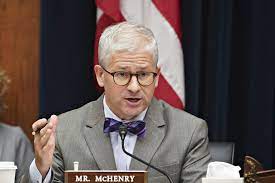 The New York Times, under the click-bait headline this morning "Here Are the House Republicans to Watch if McCarthy's Bid for Speaker Falters," proposes NC Congressman Patrick McHenry as a "dark horse" candidate. I swallowed my cereal spoon. Pat McHenry? Granted, I haven't been following his career in recent years the way I did at first.

He was elected to Congress in 2004, the same year that brought us Madam Virginia Foxx. He was the youngest member (29) when he began his career in Congress, and he showed every sign that he intended to rise in the ranks and attract attention as a right-wing attack dog. (Shades of Madison Cawthorn.) But he mellowed and rather quickly. He's been challenged in every Republican primary since 2004 by conservatives who call McHenry a closet liberal, but he always wins.

He became chief deputy whip to Speaker John Boehner, which put him on the "establishment" side of things. According to Katie Edmondson, McHenry "pointedly took a lower-profile, behind-the-scenes approach to the job. And he developed a reputation among other lawmakers for his braininess and interest in tax and financial policy."

The Times article also points out that McHenry is the only member whose name has emerged as a possible compromise candidate for speaker who voted to certify the 2020 electoral count.

So, no, it ain't never gonna happen.

Posted by J.W. Williamson at 1/03/2023 10:45:00 AM
Email ThisBlogThis!Share to TwitterShare to FacebookShare to Pinterest
Labels: Patrick McHenry

I nominate Madame Foxx.
She has the gaze.