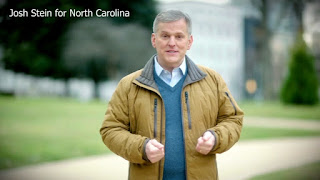 This morning, slightly after 8, North Carolina Attorney General Josh Stein announced via Twitter that he's running for governor in 2024.

Accompanying the tweet is an introductory video. I was very glad to see him go after the extremism of his likely Republican opponent, Lt. Gov. Mark Robinson. No holding back. (You can watch the video at the link above.)

Stein's announcement comes hard on the heels of an editorial by Ned Barnett published in yesterday's News and Observer, "To Win Statewide in NC, There's One Thing Democrats Should Change," a title that got my attention.

Barnett reprises the Senate race between Cheri Beasley and Ted Budd and sees similarities with a Stein vs. Robinson battle: "...it’s something of a replay of the Senate race: A prominent and politically cautious legal veteran vs. a very conservative firebrand. The result could be the same, too, unless Democrats address the voting intensity gap they have with Republicans. Democrats who water-down their progressive positions in hopes of cutting their rural and suburban losses also diminish their support among core Democratic groups" (emphases added).

Needless to say I think Barnett is right. Cheri Beasley always seemed politically cautious and watered-down, and we mos def had a voting intensity gap in that election. We saw it in the turnout of young voters in Watauga. We saw it in decreased turnout across the state in most other Democratic allied blocs, especially among Black voters.

A key message for Democratic candidates is that trying to reach unreachable rural and conservative-leaning voters invites failing to inspire core Democratic voters. In short, to win as a Democrat, run as one.

Good advice. And Josh Stein's announcement video this morning, with it's blistering take-down of Mark Robinson's crazy extremism, give me new hope.
Posted by J.W. Williamson at 1/18/2023 09:13:00 AM
Email ThisBlogThis!Share to TwitterShare to FacebookShare to Pinterest
Labels: Josh Stein, Mark Robinson