Three More Dems in the Primary Race Against Madison Cawthorn

Community organizer Chelsea White has announced that she will seek the Democratic nomination for Congress in the 11th CD next spring. According to Ballotpedia, she's the 8th Democratic candidate in the primary. Here are the first 7, with links to WataugaWatch's profile of them:

(For Katie Dean and Brooker Smith, see below.) 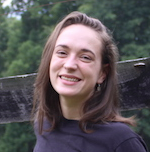 Chelsea White is the Western Regional Organizer and Communications Coordinator for Transform NC, a labor and climate statewide coalition. Since August, she has also been involved in the We Are WNC community group dedicated to flood recovery in Cruso and Canton.

White made her announcement of candidacy on Sunday at a rally against Congressman Cawthorn at the Haywood County courthouse. A group of Haywood County Republicans held a counter-rally at the same location.

Katie Dean trained as an engineer at the University of Georgia and owns an auto-repair business with her husband in Swannanoa. She has a website and a professional looking video introduction:

Brooker Smith is so far a name on a list with no internet presence that I can find.
Posted by J.W. Williamson at 9/21/2021 08:19:00 AM
Email ThisBlogThis!Share to TwitterShare to FacebookShare to Pinterest
Labels: Brooker Smith, Chelsea White, Katie Dean, Madison Cawthorn