Madison Cawthorn Fears For His Life Because ... Socialists

Two days ago, on September 14: "Photographs taken by NC11 Democratic candidate Jay Carey, and circulating today on social media, are purported to show a sheath knife hidden within easy reach of his assistant on NC11 Rep. Madison Cawthorn’s wheelchair during his appearance Monday at the Henderson County School Board meeting, held at the Henderson County Public Schools Administrative Offices in Hendersonville, NC." (FireMadison.com) 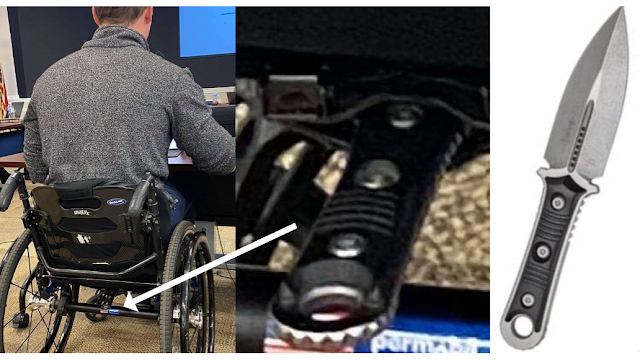 It's a Class 1 misdemeanor to take such a weapon to a school board meeting (or anywhere on educational property).
The photograph above seems pretty definitive.
Madison Cawthorn's response to the allegation looks mighty suspicious on its face: “I don’t really know anything about that,” Cawthorn said. “I’ll have to look into it, but I don’t know anything about it.”

An innocent man would have said, "No! I did not bring a military-grade dagger into the Henderson County School Board meeting."
"I'll have to look into it." Meaning, "I'll try to come  up with a plausible explanation. Just give me time."
In the meantime, while Cawthorn is looking into it, the Henderson School Board referred the matter to the Henderson County Sheriff, Lowell S. Griffin, who is a Republican elected in 2018. Tuesday evening, Maj. Frank Stout of the sheriff's office said in an email to the Times-News, "We are aware of the allegations and the photographs that have been distributed concerning Representative Cawthorn. Further information will be released as it becomes available."
Jay Carey, the Democrat who took the photo above, said, "I’m 100% certain it was a knife. I was 20 years in the military. Attention to detail is my bread and butter and what kept me alive." Carey also said he spoke with a Henderson County sheriff's deputy at the meeting but did not see the officer take any action.
Everybody is now watching the Henderson County sheriff's department. Is a US congressman, even a egotistic punk, simply above the law?
UPDATE
With lightning speed, the Henderson County Sheriff has decided that Madison Cawthorn's knife at the school board meeting must have been "inadvertent":
"Although unacceptable, occasionally a person inadvertently possesses a knife on educational property or other property where such possession is prohibited," the Sheriff's office said in a press release.
Posted by J.W. Williamson at 9/16/2021 08:15:00 AM
Email ThisBlogThis!Share to TwitterShare to FacebookShare to Pinterest
Labels: Madison Cawthorn