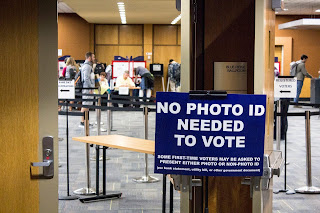 Two of the three trial judges declared the December 2018 law is unconstitutional, even though it was designed to implement a photo voter ID mandate added to the North Carolina Constitution in a referendum just weeks earlier. They said the law intentionally discriminates against Black voters, violating their equal protections.

The law "was motivated at least in part by an unconstitutional intent to target African American voters," Superior Court Judges Michael O'Foghludha and Vince Rozier wrote in their 100-page majority opinion.

The majority decision, which followed a three-week trial in April, is now likely headed to a state appeals court, which had previously blocked the law's enforcement last year while the case was heard. The law remains unenforceable with this ruling.

With a similar lawsuit in federal court set to go to trial this January and another state court lawsuit now on appeal, it's looking more unlikely that a voter ID mandate for in-person and absentee balloting will happen in the 2022 elections.

The ruling reflects "how the state's Republican-controlled legislature undeniably implemented this legislation to maintain its power by targeting voters of color," said Allison Riggs, the plaintiffs' lead attorney....

GOP legislative leaders have tried for a decade to require photo IDs to cast ballots....
Posted by J.W. Williamson at 9/19/2021 07:07:00 AM
Email ThisBlogThis!Share to TwitterShare to FacebookShare to Pinterest
Labels: racism, voter suppression, voting rights