Madison Cawthorn: Not As Big as Goliath, But Bigger Than a Wart

Johnston is a large, heavily populated county lying slightly south and east of and directly adjacent to Wake. Downtown Raleigh is 30 miles north. Possibly because of that proximity, Johnston has also grown. Its school system is the 7th largest in the state. Its capitol of Smithfield thrives with a sense of its own importance; its historic downtown made the list of National Historic Places. Though Johnston might be denser than many rural counties with growing suburbs, it's also stubbornly Republican. Lots of money went out of Johnston to support Jesse Helms back in the day, and Trump did just fine there last year (taking over 61% of the vote), so over generations it's remained blissfully Old South reactionary.

It's school board consists of 7 elected members, currently 5 men and 2 women. Two, one woman and one man, are registered Democrats. The rest are Republican, even the Black member. Cawthorn's bizarre attack on sensible public health rules, staged anew in Smithfield last night, has become his roadshow act and his cash cow. Why was he in a different congressional district, 300 miles east of his own turf? Because he's riding the hobbyhorse of a developing right-wing crusade to keep his fundraising robust, and Johnston County evidently looked to him like the Breadbasket of Trumpism.

(The county is split between three House districts and three Senate districts, but every last House and Senate member is a Republican [see below].)

Last night hundreds of Cawthorn fans (we're told) rallied in the parking lot of a shopping center -- enough enthusiastic people to draw the attendance of other Republican office-holders and would-be office-holders from all over the county, including from out of state. The crowd heard speakers along with Cawthorn and then marched to the school board offices. Some of them even got into that meeting room in Smithfield, which is (thankfully) very small. 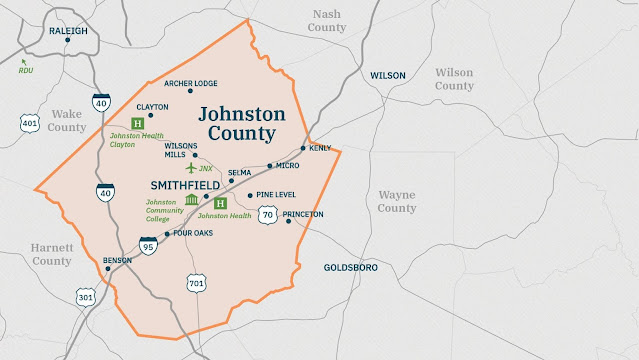 So it wasn't quite like the scene in Buncombe, where a big crowd led by Cawthorn stormed the meeting and booed the members. There was only scattered applause from the audience in Johnston, because in that tiny meeting room were also people who supported the school board's mandate for masks (which is up for routine reconsideration right now). So it wasn't all lopsided anger over the "tyranny" of masks.

What did the school board do?

Nothing. It delayed a vote because the vice-chair (one of two women who also  happens to be one of the two Democrats) missed the meeting (bereaving the death of her husband). The board put off action until she could return -- next Monday, virtually (hmmm), at 2 p.m. Taking bets what they end up doing. The mask mandate passed in August only 4-3, so there's every likelihood that two Republican members will cave to the pressure and vote to reverse themselves. Or maybe they'll develop some gumption. We wait to see.

Cawthorn's roadshow, no kidding. In Hendersonville Monday night, in Cawthorn's own district, he harangued the Henderson County School Board with his expert grasp on history -- "Tyrants thrive when freedom is sacrificed on the altar of safety," he said. "I believe that King George III would be immensely proud of Gov. Roy Cooper. He's running the state with an iron fist, liberty be dammed. He has ripped away your power and your will." Despite the theatrical aria to "our freedoms," and a large turnout of loud people supporting Cawthorn, the Henderson board nevertheless voted 6-1 to retain the mask mandate. D'oh!

Maybe Just Noise Is the Point

Maybe the efficacy of protesting mask mandates -- getting school boards to actually reverse their masking rules -- isn't Cawthorn's goal. Maybe he doesn't care about actual public policy, only cash returns and more Fox News and Infowars stardom. Conservative activists -- Trumpists -- love Cawthorn's masquerade of give 'em hell "patriotism," because since at least the rise of Ronald Reagan, the Right can't tell a huckster from a dumpster.

Western Carolina University political scientist Chris Cooper thinks Cawthorn is laying track to attempt to oust Sen. Thom Tillis in the primary of 2026, because by then MadCaw will presumably be out of diapers and old enough constitutionally to run for the Senate:

Cawthorn’s trip to Johnston County has been covered in media outlets across the state, and has spawned enough Twitter traffic to rival an early season Duke/UNC game. The attention is the point. And it’s working.

If the attention is both the means and the primary end, then fundraising is a secondary goal--and one that will likely be successful. Cawthorn raised over $1.7 million through June 30 of this year—a sum that dwarfs the receipts from established Republican members of Congress like Patrick McHenry and Virginia Foxx. When the fundraising numbers are revealed from September, 2021, I’ll bet you a beer (or ginger ale if that's more your speed) at any North Carolina brewery that the Johnston County event will spark a pop in Cawthorn's fundraising—a cash infusion that would come in handy for any candidate, but particularly one with Cawthorn’s burn rate [Cawthorn has been spending it as fast as it comes in].

It also seems likely that Cawthorn’s political aspirations extend past NC-11, making this out-of-district attention grab a little less confusing that it would be for a member of Congress who has no intention of running for higher office .... Cawthorn has not been shy about criticizing Republican party leadership and recently called Tillis “a terrible campaigner and a complete RINO” [Republican in Name Only]. It’s not much of a stretch to think that Cawthorn has his eyes on that seat.

The Johnston County School Board