Next week, Rep. Madison Cawthorn of the 11th CD will lead an anti-vax, anti-mask demonstration/march to the Johnston County School Board meeting in Smithfield, which is in the 7th CD. Here's the flyer that's promoted the protest: 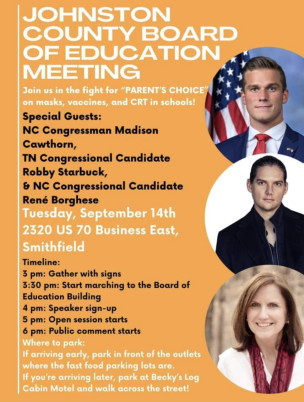 Why Rene Borghese, who's running against David Price in the 4th CD, would decide that this is a cool event to involve herself in -- that's a good question. And why the man in black with the slicked-back hair, who's running for Congress in Tennessee, also wants to participate begins to look like an audition for Unsolved Mysteries.

If screaming at school boards for trying to protect school children is your bag, then we're sure you'll want to be there.

Posted by J.W. Williamson at 9/08/2021 07:54:00 AM
Email ThisBlogThis!Share to TwitterShare to FacebookShare to Pinterest
Labels: Madison Cawthorn, public education