Another Democrat Wants To Challenge #MadCaw in NC11 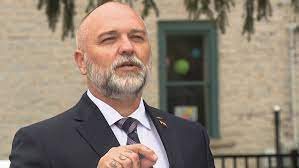 Jay Carey, a 50-year-old political novice from Hendersonville, has added his name to the growing list of Democrats who'll compete next March in the Democratic primary for the privilege of taking on Republican first-termer Madison Cawthorn in the NC11.

Carey appears to be basing his campaign primarily on his career as an Army combat veteran in the Middle East, and he says he thinks he'll win against Cawthorn because he'll get the independent vote. How that independent vote helps him in a Democratic primary is less clear.

Lurah Lowery of the Hendersonville Times-News got there first with a thorough profile.

Total number of announced Democratic candidates is now up to four in the 11th CD.

Posted by J.W. Williamson at 4/16/2021 08:24:00 AM
Email ThisBlogThis!Share to TwitterShare to FacebookShare to Pinterest
Labels: Jay Carey, Madison Cawthorn