Cawthorn Said He Would Destroy OSHA To Save COVID 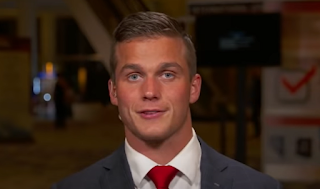 Two days ago President Joe Biden announced that he is ordering new federal safety regulations that call for businesses with more than 100 workers to require vaccinations against the coronavirus and paid time off to get vaccinated -- or weekly testing for employees who refuse the vaxxing. The Occupational Safety and Health Administration (OSHA) is charged with drafting an "emergency temporary standard" to carry out the mandate, provided for in the legislation that President Richard Nixon signed creating OSHA. Some 80 million workers will be affected.

“Some of the biggest companies are already requiring this — United Airlines, Disney, Tyson Foods and even Fox News,” President Biden said during a speech Thursday. Many companies, including United Airlines and Tyson Foods, were already moving toward requiring vaccines. Business Roundtable, a powerful lobbying group, released a statement supporting the administration’s new orders:

“Business Roundtable welcomes the Biden administration’s continued vigilance in the fight against Covid,” said the group, whose members include leaders of General Electric, Amazon, Goldman Sachs and dozens of other large companies. “America’s business leaders know how critical vaccination and testing are in defeating the pandemic.”

How did some Republican governors (many of whom want to be president, to inflict their particular brand of cavalier ignorance on additional millions) react to Biden's order? They stayed true to their Trumpist ignorance. Gov. Henry McMaster of South Carolina said he would fight Biden and his party “to the gates of hell.” “@JoeBiden see you in court,” Gov. Kristi Noem of South Dakota wrote on Twitter. Gov. Ron DeSantis of Florida -- oh who cares?

And what did the punk freshman from the 11th district of North Carolina do? He tweeted two days ago, at 6:32 p.m., "I'm filing a bill to gut OSHA." That was perhaps a premature threat, as Cawthorn can't even write his own signature without a good headstart, let alone legislation dissolving a Federal agency that is charged with guaranteeing a safe work environment. Cawthorn's tweet has subsequently disappeared. Perhaps someone over the age of idiot explained to the baby congressman what OSHA is and what it does for American workers.

Posted by J.W. Williamson at 9/11/2021 08:32:00 AM
Email ThisBlogThis!Share to TwitterShare to FacebookShare to Pinterest
Labels: Joe Biden, Madison Cawthorn