With an Ego as Big as a Refrigerator 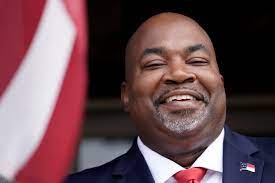 The election last fall of political novice Mark Robinson to the office of Lieutenant Governor stunned a lot of people. He had no qualifications (and admittedly, the office of Lite Guv requires few qualifications), but he excited the Republican base because he was a Black man mouthing conservative talking points and he had made himself notorious for a rant about guns in front of the Greensboro City Council.

While he campaigned in 2020, Robinson flaunted his refusal to wear a face covering in crowds, sealing his popularity with the Trumpists through denialism and knuckleheaded ignorance. He tweeted back in February, “The looming pandemic I’m most worried about is SOCIALISM.” Instead, he said, he was “earnestly praying that this virus will disappear faster than Christine Blasey Ford and a car load of witnesses against Hillary Clinton.”

In office now as Lite Guv (thank you, Rob Schofield!), Robinson -- with not much else to do -- has launched a crusade to "out" public school teachers who might be teaching about slavery and the history of racial inequality, items that Robinson equates with "fake news."

With not much else to do, Robinson is also exploring the possibility of jumping into the already crowded Republican primary for the US Senate seat (why, we'd hardly stopped laughing at Pat McCrory, and here comes another clown, though Robinson could probably win a Republican primary in North Carolina against squishy ex-Guv McCrory). Rob Schofield posted a blistering appraisal of Robinson this morning:

While perhaps a bit surprising given that the sum total of Robinson’s lifetime service in public office now stands at 98 days in a job with no real responsibilities ... Robinson is clearly possessed of at least three attributes that are vitally important for politicians in 21st Century America — especially in the Trumpified Republican Party.

First, he has no record of public service or accomplishment in government. Indeed, it’s a little unclear exactly what he did before he ran for office either .... perfect for a modern politician as, just as the case with Donald Trump in 2016, it give his opponents nothing in the world of government or policy for which to blame him.

Second, Robinson has apparently had his share of financial issues. This is the extent of what Wikipedia says about his personal life:

Robinson and his wife, Yolanda, have two children. They live in High Point, North Carolina. Robinson has filed for bankruptcy on three separate occasions, has been sued for payments, and had liens placed on him by the Internal Revenue Service as recently as 2012. He says that he has straightened out his financial problems.

This too, is perfect. What could be more in keeping with the numerous examples set by Trump than having an extended history of trouble with creditors and repeatedly finding yourself in court over financial disputes? Today’s Republican voters clearly appreciate a candidate who knows how to take care of Number One.

And third and finally, like Trump, Robinson clearly thinks big. After all, who would have thought that philandering, casino-owning TV barker with no record of public service or accomplishment could leap from the tabloids to the White House in a campaign rooted in a blatant lie about the birthplace of his predecessor?

If Trump could pull that off, who’s to say Robinson can’t follow a similar path to the Senate?

Indeed, given this backdrop, Robinson might as well go ahead and declare for the presidency in 2024 now and run two races at once. After all, has anyone really double-checked where Joe Biden was born?

Posted by J.W. Williamson at 4/16/2021 09:03:00 AM
Email ThisBlogThis!Share to TwitterShare to FacebookShare to Pinterest
Labels: Mark Robinson, Pat McCrory