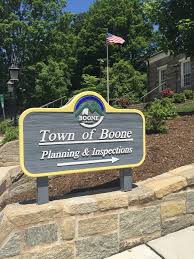 House Bill 291, vaguely and innocuously titled "Bldg. Plan Approval - Certain Commercial Prop.," and Senate Bill 349, cheerily titled "Increase Housing Opportunities," are both Trojan horses and pieces of developer crapola now pending in the NC General Assembly. Last night the Boone Town Council held a bellwether emergency meeting over its provisions and over the threat it promises for every municipality in North Carolina to chart its own planning course. The Boone Town Council voted unanimously for the resolution pasted below. The unanimous vote is notable for a fractious council that has had trouble finding much common ground over the past two years.

WHEREAS, municipalities in the State of North Carolina have their own unique characteristics and challenges so that “one size” does not “fit all,” and statewide zoning mandates thus may have unintended negative consequences for the residents of the State; and

WHEREAS, unfunded mandates by the State, particularly during a time when local revenues are under pressure due to Covid-19 and other factors affecting local economies, will force communities such as Boone to either increase property taxes or decrease services critical to the their residents, such as street maintenance or fire and police protection; and

WHEREAS, HB 291 is pending in the North Carolina General Assembly and would force municipalities to complete an “initial plan review” of commercial development plans initially sealed by a “design professional,” without regard to their complexity, deficiencies, or impacts of human health and safety, within 15 days, and issue permits within 30 days of the application for development unless additional information is requested within the first 15 days; and

WHEREAS, HB 291 provides that if within the initial 15 day period, if additional information is requested by the town, permits must be granted within 15 days of the submission of additional information or the developer may retain a “third party firm” to review its plans at the expense of the municipality and must issue “all necessary permits” for the development within 72 hours of approval by that third party; and

WHEREAS, in order to comply with HB 291, the Town of Boone would have to greatly expand its planning department, which would force an increase in property taxes or a decrease in other services; and

WHEREAS, HB 291 unfairly puts the burden on taxpayers to pay for the private development permitting by commercial developers; and

WHEREAS, HB 291 essentially redirects long-extant governmental functions now performed by local governments to protect the public and to allow for the orderly growth of communities through zoning, to private and unspecified engineering or architectural firms who may have conflicts of interest, with no recourse for decisions which may violate local zoning ordinances; and

WHEREAS, property owners in the Town of Boone often purchased their properties at premium prices in order to have the benefits and protections of local zoning ordinances which protected their investments from incompatible and unsafe development; and

WHEREAS, commercial developers within the Town of Boone, often with no prior connection with the town, but because of the attraction of the large student housing market, have sought to build commercial developments which were substandard and non-compliant with

building and zoning standards, and which would have caused great harm to the quality of life for residents of adjacent and nearby neighborhoods; and

WHEREAS, SB 349, too, is now pending in the North Carolina General Assembly, and would force municipalities to allow duplexes, triplexes, quadplexes and townhouses into all residential zones, including all low-density zoning districts, for the stated purpose of expanding housing opportunities in towns; and

WHEREAS, SB 349 exempts residential areas in which private restrictive covenants apply, thus differentiating between sub-divisions such as gated communities and the neighborhoods without such protections, in essence protecting the wealthy by exposing middle and low income residents to incompatible development dictated by state government; and

WHEREAS, although SB 349 has reportedly been endorsed by “affordable housing” proponents as a way to increase supply and decrease costs, in actuality there is nothing in the bill which actually controls costs; and

WHEREAS, the practice by multi-family developers in the Town of Boone is to rent housing units by the bedroom at prices usually far in excess of the mortgage cost of a single family home; and

WHEREAS, when low density neighborhoods in Boone have been made available for higher density housing, existing single family homes have often been demolished to allow more intense types of housing, destroying the character of Boone which has made it attractive, but also with the unintended result that rental prices have actually increased as low density housing disappears; and

WHEREAS, SB 349 likewise mandates the allowance of “one accessory dwelling,” which can consist of a duplex, on each lot on which there is a single family residence, circumventing all usual approval processes such as conditional district zoning, and trumping all local parking requirements and utility approval protocols without regard to the impacts of a potential tripling of density; and

WHEREAS, SB 349 has the potential to fundamentally change most neighborhoods in Boone and accelerate the disruption of the lives of its permanent citizens, as out-of-town investors and AirBnB operators continue to buy up low density housing stock; and

WHEREAS, SB 349 allows deficient applications to nevertheless vest development rights, undermining the ability of local jurisdictions to react to changes within their communities; and

WHEREAS, SB 349, by using terms which are undefined and vague, makes expensive future litigation likely to create certainty around the meaning of its terms; and

WHEREAS, SB 349 shifts financial responsibility for a developers attorney’s fees onto the municipality whether or not the town’s decisions have been made in good faith in a manner seeking to protect the common good; and

WHEREAS, SB 349 prohibits a municipality from even examining a traffic impact analysis which has satisfied the North Carolina Department of Transportation, whether or not the municipality believes that the traffic generated by the project poses a danger to public safety and the ratification by the Department is prudent; and

WHEREAS, SB 349, under the guise of creating affordable housing, is actually a usurpation of local zoning authority and if passed, will undermine the long-term stability of the Town of Boone for its permanent residents, betraying the promises of zoning which residents have relied upon in making their most important financial investments, the purchase of their homes;

NOW THEREFORE BE IT RESOLVED, that the Town Council of the Town of Boone, North Carolina, respectfully requests:

Posted by J.W. Williamson at 4/01/2021 08:40:00 AM
Email ThisBlogThis!Share to TwitterShare to FacebookShare to Pinterest
Labels: North Carolina General Assembly, Town of Boone, zoning

As if the mob in Raleigh cares about what the city of Boone wants. They consider it enemy territory. More effective would be pushback from municipalities controlled by the Republicans.

Better to act than not. Republican-controlled municipalities will also oppose these bills. It may be a question about Charlotte, since they are pushing multi-family dwelling in single-family zoning.
Good for the Boone Town Council and I believe that Blowing Rock will do similarly. Probably other towns in Watauga as well.