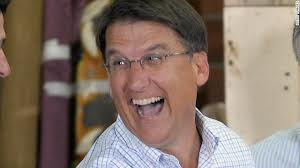 Politico seems to have been first, confidently reporting at noon yesterday that former Gov. Pat McCrory would be announcing his candidacy this week for the US Senate seat that Dick Burr is giving up and that early polling has McCrory well ahead of both former Congressman Mark Walker and current Congressman Ted Budd in a Republican primary.

At 2:03 p.m., Mark Walker, who's been in the race already for months, tweeted some sour grapes:

With taking back the Senate majority hinging on our success in North Carolina, why would we gamble on Pat McCrory - a career politician who has lost more statewide races than he’s won? McCrory has routinely attacked conservatives including President Trump...

He followed up two minutes later with this, alluding to the fact that McCrory had apparently been considered -- and was passed over -- for a job in the Trump admin:

Meanwhile, Lara Trump (who?) seems to be fading faster than cheap upholstery in the sun. The McCrory polling that found him far ahead of other Republicans in the race pointedly didn't poll for McCrory v. Lara Trump at all.

Trumpists seem to be banking on a Ted Budd candidacy, since they don't cotton all that well to McCrory, who's considered a weak vessel and squishy like cream cake. We remember McCrory most vividly for his claim that he was capable of stepping on the toes of the right as well as the pinkies of the left, an hilarious brag by a man who was always completely at Phil Berger's beck and call. Go no further than HB2, the notorious "bathroom bill" that McCrory signed and then regretted, as the state lost all kinds of investment.

McCrory has a juicy record for both conservatives and Democrats to dig into. After he lost reelection in 2016, he became a talk radio yakker in Charlotte, and seems to believe the path is now open for him to do a Thom Tillis into the US Senate.

The really good news, if McCrory runs, is that WBT will have to take his show off the air or give opposing candidates equal time.

That'll be one less incompetent boob clogging up the airways with nonsense.