Sigh. Another Republican Seat in Congress

Busy news day yesterday, which included the totally unsurprising and wholly expected development that the US Census says North Carolina will get a 14th Congressional seat, due to our attractiveness to in-migrants. Naturally, the Republicans in the General Assembly will be totally fair in their drawing of new maps [snort!]. Right now the NC delegation in Congress is 9-4, Republican-Democrat, and we can just about guarantee that it'll be 10-4 after new maps are drawn and ten seconds before the lawsuits fly.

[Sorry, but I was wrong above. The current NC Congressional delegates is 8-5, majority R. The R majority in the General Assembly intend to right that historic wrong.]

Lekha Shupeck published on Twitter a screenshot, apparently from a Carolina Journal group (Art Pope), of what the Republican scheme might be: 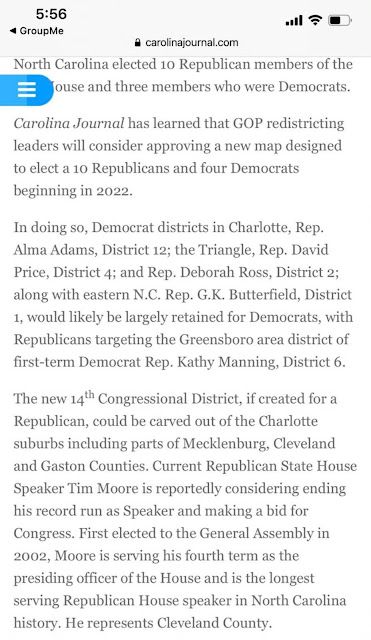 Posted by J.W. Williamson at 4/28/2021 07:27:00 AM
Email ThisBlogThis!Share to TwitterShare to FacebookShare to Pinterest
Labels: redistricting, Tim Moore