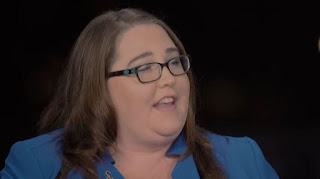 Rachel Bitecofer is a 42-year-old political scientist who teaches -- and writes extensively, disruptively -- at Christopher Newport University in Virginia. She is rather unique among her prognosticating brethren for coming within one US House seat of nailing the Blue Wave of 2018. She predicted a Democratic gain of 42 seats. The Democrats took 41. She got it right, according to David Freedlander (Politico.com), "even as other forecasters went wobbly in the race’s final days. Not only that, but she put out her forecast back in July, and then stuck by it while polling shifted throughout the summer and fall." While all the other analysts were saying, "Oh the Democrats are going to screw this up. They are overreaching. They are going to get 23 seats if they're lucky" -- Bitecofer was the too optimistic one who was right.

Reading her analysis both jazzes me and scares the God-blessed living shit out of me. Because what Bitecofer predicts for 2020 in red Trump counties -- and I'm surrounded by blood-red western North Carolina Trump counties -- is that the Trump vote will likely increase over 2016. There aren't enough "soft Republicans" to make a difference for Democratic candidates, and right-leaning independent (Unaffiliated) voters will be leaning harder right, as their hatred of Democrats congeals like lard. The Republican coalition -- mostly non-college whites, with a smattering of religious-minded voters, financiers, and people in business, largely in rural and exurban counties -- is now -- following impeachment -- not only mad as hell but they're scared, too, of what could come next after a rejection of Trump.

With a red wall building for this November, if there's not enough left-leaning and otherwise previously disinterested voting-age population who will commit to vote in sufficient numbers to overtop that red wall, there's little hope for Democratic campaigns in districts rated "Safe Republican" (and that label applies to most of western North Carolina). What is a political "wave," anyway, but the working of "negative partisanship," an instinctive human reaction to extreme departures from the norm. Bitecofer relies on "negative partisanship" to explain the Democratic wave of 2018. She sees "negative partisanship" as an almost genetic American inheritance -- a pushing back against whoever's in power. In 2018, it became a wave of revulsion to a plain awful human being -- his cruelties, his double-dealing, his willful and destructive ignorance.

Negative partisanship is not exclusive to Democrats. In 2010, it was the Tea Party wave of revulsion against the government spending of a black man. The Tea Party wave became the Trump surprise of 2016. "...Modern American elections are rarely shaped by voters changing their minds, but rather by shifts in who decides to vote in the first place."

Turnout explains everything. Turnout of new people entering and exiting the electorate rather than people switching sides. What drives that kind of turnout in major "change" elections? "Negative partisanship." Shorter definition: Mass expression of instinctive human emotion rejecting an ideology or a personage.

"About 55 percent of eligible voters are likely to go to the polls, and the winner is determined by the 15 percent or so of 'swing voters' who flit between the parties. So a general election campaign amounts to a long effort to pull those voters in to your side."

Bitercofer laughs at that. The swing voter -- at least in appreciable numbers -- is largely a myth. “The idea that there is this informed, engaged American population that is watching these political events and watching their elected leaders and assessing their behavior and making a judgment -- it's just not true.” 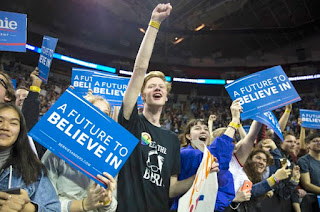 Isn't really about the candidates. Bitecofer has said that any one of the Tier 1 or Tier 2 Democratic candidates can -- and will -- win against Trump, but more recently on Twitter she's hedged a bit on both Bernie Sanders and Joe Biden, calling them the riskiest options for Democrats. Alarmingly, Sanders failed to turn out his promise of record numbers of new voters in the Iowa caucuses this week, and Biden represents too much the status quo. “If you want to win the election, you have to be able to frame your candidacy in a way that reminds voters that Trump is an abnormality that must be excised,” Bitecofer said.

I realize that Bitecofer has critics.

Bitecofer hasn’t exactly been clairvoyant: Her original Senate prediction was off in 2018. She didn’t anticipate the surge in GOP turnout that would match the surge in Democratic turnout in places where the demographics still favored Republicans. She thought Democrats would win Florida, and maybe even Texas, and that the Georgia governor’s race was winnable. What she didn’t count on at the time was that negative partisanship can work both ways, even when there is one party in power, and that no one knows how to fire up the fear factor in his coalition quite like Donald Trump. He did just that, and Blue Dog Democrats in Missouri and Indiana and South Dakota were done for.

But still, the results bore out her theory: For Democrats to win, they need to fire up Democratic-minded voters. The Blue Dogs who tried to narrow the difference between themselves and Trump did worse, overall, than the Stacey Abramses and Beto O’Rourkes, whose progressive ideas and inspirational campaigns drove turnout in their own parties and brought them to the cusp of victory.

The Democratic coalition -- people of color, college-educated whites, and people in metropolitan areas -- has got to grow in 2020, and appreciable growth in rural jurisdictions is sometimes just plain impossible.

Finding a new voting cohort -- including college students, for example -- the "step-up" voters, the previously disengaged, the young, especially the educated -- is far easier in urban areas. I don't like feeling apprehensive about that, never mind my little blue dot of Watauga County.

I think she's only seeing part of the many aspects of motivation that can influence an election. Her theory basically boils down to whoever is most angry, wins.

There's enough anger to go around on both sides. Liberals are furious that Trump was let off the hook, continuing his damaging racist and white nationalist policies, and sending the US into a death spiral. Trump's cult is afraid that the liberals are going to take their guns and Bibles away and cut off their weewee.

What concerns me more here is that both sides are at an impasse - the world views of Trump followers and the rest of America are completely incompatible. With Trump, you're looking at an authoritarian, minority-rule theocratic government that would look something like a cross between the US Jim Crow era and Russia.

There are really only three things that can come out of 2020.

If the liberals win decisively, Trump supporters will give us years of isolated domestic terrorism and state governments that will take advantage of Trump-packed courts to keep damaging conservative policies in place - a future that isn't unlike some failed, unstable states that emerged after the breakup of the Soviet Union.

If conservatives win, you'll start to see a migration of businesses, minorities, and talent outside of Trumpian states, similar to the mass migrations of the Jim Crow era. It will be a slow attrition, but you'll see the South decline economically and grow more red.

If there is a mix of power, like what we have now, it's just going to build up anger even more and you'll see a little of both of these scenarios. It might be another decade before demographics create a "new normal" for American politics. Or the anger and infighting just festers for years to come.

People like Nancy Pelosi make me nervous; however, her stunt at the State of the Union Democrat put Democrats back further. People like our new Boone Town Council member who is a student make me nervous. How could this town elect such. And to think he was sworn in on an art object.