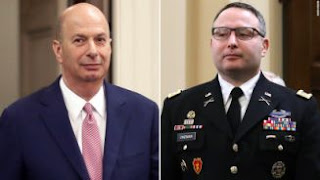 Yesterday Lt. Col. Alexander S. Vindman, a decorated Iraq war veteran on the National Security Council staff and a witness at Trump's impeachment investigation who had direct evidence about the July 25th phone call with the Ukrainian president, was marched out of the White House by security guards -- as though he had stolen a laptop. Vindman’s brother, Lt. Col. Yevgeny Vindman, an Army officer who also worked on the National Security Council staff and who had no connection to the impeachment, was also fired.

A few minutes later, Trump ordered Ambassador Gordon D. Sondland, the founder of a hotel chain who donated $1 million to the president’s inaugural committee and who was a key witness in the impeachment, recalled from his post as the ambassador to the European Union.

The White House made no effort to portray the ousters as anything other than reprisals. The president’s critics had warned that he would feel unbound if acquitted, and some said the dismissals proved their point. Donald Trump Jr., the president’s eldest son, celebrated the dismissals, offering mock thanks to Congressman Adam Schiff. “Were it not for his crack investigation skills, @realDonaldTrump might have had a tougher time unearthing who all needed to be fired,” he tweeted.

Senator Susan Collins of Maine, a Republican who voted to acquit the president but expressed hope that he would learn a lesson from the impeachment, said witnesses should not be punished. “I obviously am not in favor of any kind of retribution against anyone who came forward with evidence,” she said in Maine, according to The Portland Press Herald.

[The above draws on reporting by Peter Baker, Maggie Haberman, Danny Hakim, and Michael S. Schmidt]