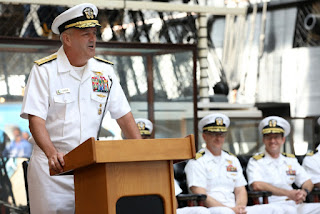 Special Warfare Rear Adm. Collin Green, the US Navy admiral responsible for the service's special-operations forces, is stepping down following the controversial intervention of President Trump into the court-martial of Special Warfare Operator Chief Eddie Gallagher. Green moved to withdraw Gallagher's Trident pin, which signifies membership in the Navy SEAL community, and Trump both intervened in the Navy's judicial system to free Gallagher from pretrial detention and restored his rank after the conviction.

Green in November ordered a peer evaluation of Gallagher, who had been demoted and charged with war crimes, including the murder of an ISIS prisoner of war and the shooting of two people in Iraq in 2017. Gallagher was acquitted of those counts but convicted of a lesser charge of posing for a picture with the dead ISIS fighter.

The incident led to other resignations by Navy leaders. Navy Secretary Richard Spencer was forced to resign after expressing disagreement with Trump's actions. According to a New York Times report, Spencer and Green had threatened to resign if Trump intervened on Gallagher's behalf.

Posted by J.W. Williamson at 2/05/2020 09:55:00 AM
Email ThisBlogThis!Share to TwitterShare to FacebookShare to Pinterest
Labels: Collin P. Green, Donald Trump