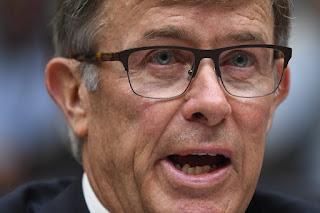 Joseph Maguire, the current acting Director of National Intelligence, was blindsided by President Trump's decision to replace him with hyper Trump loyalist Richard Grenell, currently the ambassador to Germany. The president has been fixated on appointing people he believes are loyal to him, according to anonymous White House sources, and he was particularly fixated on placing a fiercely loyal ally atop an intelligence structure he has frequently railed against.

Maguine made it onto Trump's shitlist when he became the center of a firestorm back in September when he testified before Congress over the whistleblower complaint that led directly to Trump's impeachment. Maguire, along with the Justice Department, had actually blocked the intelligence inspector general from passing the complaint to Congress immediately as required by law. Congressional Democrats criticized Maguire for not passing along the full complaint to Congress earlier. Trump fired him for passing along the complaint at all.

“I am committed to protecting whistleblowers and ensuring every complaint is handled appropriately,” Maguire said in a statement at the time of his testimony. “I look forward to continuing to work with the administration and Congress to find a resolution regarding this important matter.”