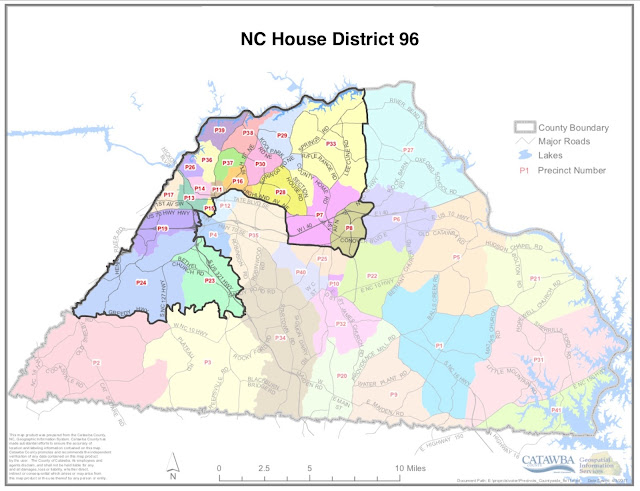 North Carolina House District 96 is weirdly carved out of northwestern Catawba County. Includes most of Hickory, St. Stephens, Conover, Long View, and Mountain View, plus the densely populated but more rural neighborhoods along Lee Cline Rd. and Spring Rd. in northernmost Catawba. According to numbers guy Michael Bitzer, Trump carried the district in 2016 with 63.79%. (Trump carried most other western North Carolina counties by 70% or more, except for a couple of exceptions -- Watauga and Jackson, I'm looking at you -- so a Trump majority of 64% looks almost like moderation.) Democrat Kim Bost ran for the NCH96 seat in 2018. She got 39.26% of the vote. The Republican incumbent Jay Adams took 60.74%. Meaning that Kim Bost did better on the ballot than Hillary Clinton did against Trump in '16. Kim Bost is running again. She celebrated her 2020 Kickoff on January 14, attracting good attention and support. Where there's only a ten-point gap (did I just say only?) in a Western North Carolina district, there's hope. There's at least room for improvement. (Bitzer rates the district "Safe Republican.")

This district has a poverty level of 14.1%, slightly lower than the state's 16.1%. It's been a fading industrial sector with a blue-collar workforce under economic pressure. Median household income, $50,758. Only 26% of the population holds a four-year college degree, though the Apple data center in Catawba and the Google data center in neighboring Caldwell, along with high-tech manufacturers like Corning Optical and CommScope, may be drawing new residents with higher educational attainment. At first blush, this district offers a Bernie Sanders kind of demographic, though Bernie only pulled 44% of the vote in all of Catawba County against Hillary in the March 2016 Democratic primary. He might do considerably better on a General Election ballot (and we might actually get the chance to see that).

Kim Bost is an attractive candidate, but so far I can't tell that she's upping her game from 2018. She hasn't updated her website -- it still says "vote for me on November 6." The policy positions are solid and well written but safe. Considering the numbers above, why not go full "progressive populist" in House District 96, and find those citizens who haven't been voting and who need a little rabble-rousing incentive to register? Going for broke because the numbers are against you isn't every candidate's cup of tea. Bost can hope for a strongly progressive Democrat at the top of the ticket -- or for the old working-class affection to ignite for Joe Biden, if that's still a thing come November. I'm persuaded by the analysis of Rachel Bitecofer that Democratic winning margins since 2016 have depended on energizing a sector that hasn't been regularly voting -- not on winning mythical "moderate" Republicans. Democrats will not win Republican vote in sufficient numbers in a district like NCH96. Democrats have to find and register new, previously disengaged voters and build a fire under the slackers with what Bitecofer calls "negative partisanship."

Bost is active on both Twitter and Facebook, though less active on Twitter where she could drive a message ("North Carolina is broken, and I can tell you who broke it! His name is Jay Adams"). I appreciate videos but not ones with poor sound quality. I think Bost has a following of dedicated volunteers who'll do door-knocking and phonebanking, but she needs exceptional data management that can identify and target persuadable marginal voters and turfs with concentrations of the unregistered.

Republican incumbent Jay Adams is a 73-year-old Boomer and real estate broker (specializing in commercial real estate) who's held this House seat since the elections of 2014. In Civitas rankings, he's 13th most conservative in the House, going along with the tax-the-middle-class-but-not-the-rich agenda of the Republican majority in Raleigh -- shift the tax burden while squeezing education and denying health insurance to the most vulnerable. He chairs no committees. He's a soldier who marches to Speaker Tim Moore's drum, and he looks plenty prosperous for the effort.