Down in Forest City 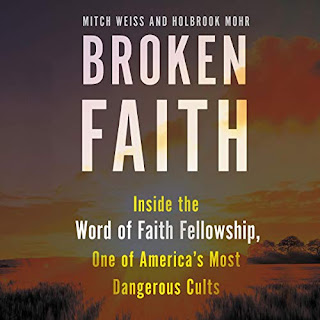 A new book about what the authors call "one of America's most dangerous cults" focuses on the Word of Faith Fellowship in Rutherford County, just down the mountain from us. The two authors were interviewed on Morning Edition today.

Democrat David Wheeler, who is running again this year against incumbent Republican Ralph Hise in NC Senate District 47, made some news in 2018 when he tried to take cameras inside the church. Wheeler accuses Hise of essentially shielding the church from meaningful scrutiny (which numerous law enforcement agencies in Rutherford County are also accused of).

The authors of "Broken Faith" talk about the leader of the Word of Faith, Jane Whaley, as a frightening scourge of God:


You have to realize they believe that Jane Whaley was a prophet, that God spoke to her and everything she said was the gospel. And one of the techniques that she used was that she had everybody inform on each other. And the reason they did that was because that was the godly way of doing things. It was, in a way, she would have them tell her their deepest, darkest secrets. And then she kept a file of those secrets. And if they threatened to leave or did something wrong, she had all the evidence she needed there to keep them in line.

A peculiar form of abuse at the church has been talked about for years, as insiders escaped and described what went on there:


...it was something that really got worse over time. And you have to understand what her philosophy is. The doctrine is really pretty simple — devils are real. And if you're a drug addict, it's because you have this drug devil. If, you know, you're an alcoholic — the same. If you're having an affair, it's the same thing. There are lustful devils. And so what she would do is it was called Devils in Deliverance, where they would have people surround you and scream at you to get the devils out. Get out, devil. And it would go on and on and on. Perfect example is with a baby. If babies cried, it wasn't because they were hungry or they had a dirty diaper. It was because there was a devil inside them that was making them cry. So you would have groups of people surrounding an infant and screaming until that baby would just get tired and finally, you know, go to sleep....

None of the press investigative pieces or law enforcement investigations or lawsuits have seemed to make a dent:


You have the sheriff. You have the district attorney. You have all these people who have looked the other way, who know what's going on, and they're just not doing their job. This church now is thriving.

Posted by J.W. Williamson at 2/17/2020 10:16:00 AM
Email ThisBlogThis!Share to TwitterShare to FacebookShare to Pinterest
Labels: David Wheeler, Ralph Hise, religion and politics