Tim Moore, a Self-Serving Politician, Wants To Be Chancellor of East Carolina University


Cat's out of the bag. Cat's on the hunt for an easy mouse. 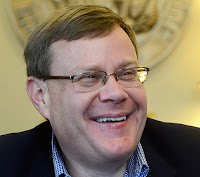 Why would the second most powerful man in North Carolina -- NC House Speaker Tim Moore -- want to become chancellor of one of North Carolina's biggest universities? Perhaps because it pays in the neighborhood of a half-mil annually. The last full-time ECU chancellor, Cecil Staton, was making $450,000 when the Board of Governors (UNCBOG) ousted him. Tim Moore is no piker. He could undoubtedly negotiate that salary up a smidge if he took the job, seeing as how the men in charge of the hiring all owe Moore for their very jobs on the UNCBOG.

"Would you do me a favor, though?"

Moore is plenty tainted by self-serving during his time in the Speaker's chair. In August 2015, it came to light that Tim Moore had been appointed Cleveland County Attorney by a Board of Commissioners led by Tim Moore's own cousin, a partial sinecure worth $25,000 per annum -- $25k, whether he did a lick of actual work or not. Because as Speaker of the House, Tim Moore would have to be in Raleigh for sometimes months on end, so any legal business for Cleveland County would have to be handled by other lawyers paid their fair market rate.

Late in 2015, WBTV investigative reporter Nick Ochsner outed Moore for flagrantly ignoring campaign finance reporting rules, and by January of 2016 Ochsner was hot on Moore's trail for paying campaign rent to himself. ("Speaker Tim Moore: Big Spender But Not So Great at Reporting It")

In 2018 Moore was credibly accused of improperly intervening with Gov. McCrory's Dept. of Environmental Quality so a limited liability company he co-owned could avoid fines related to underground fuel storage tanks. Moore and his partners bought the property for $85,000 in 2013 and sold it three years later for $550,000, aided by winking DEQ officials.

Later in 2018, there was more quid pro quo action that came to light, summarized by Dan Kane in the News and Observer:


Two years after then-House Rules Chairman Tim Moore’s legislation rescued a controversial south Durham mixed-use land project [751 South] and boosted a high-end residential community [Colford Farms] next door, one of the developers took him on as his lawyer. And two years after that, the same developer, Neal Hunter, gave Moore a legal services contract for a Durham-based pharmaceutical company Hunter had recently co-founded, paying him $40,000 for four months of work largely related to how federal tax law treated such startups.

This is the sterling candidate for leading a major North Carolina university, who's been incidentally working behind the scenes to seize the prize, but who's now been outed by anonymous members of the UNCBOG who talked to reporter Joe Killian (NC Policy Watch) about the unseemliness of the whole affair. Those BOG members aren't happy about not only the appearance of double-dealing but also the actual arrogance of the man who doesn't seem to mind the appearance -- especially the live possibility that Tim Moore had his hand in the sudden and unexplained ouster of Chancellor Cecil Staton and then the ignominious fall of the interim chancellor Dan Gerlach:

“It is not an accident that Tim Moore has had his hand in every one of these major leadership changes at ECU,” one trustee told Policy Watch this week. “He wanted to be the UNC President and it became clear to him that would be too controversial and there were some members of the [UNC Board of Governors] who would not go for that. So he began looking at where he could be a chancellor and ECU looked like the best place.”