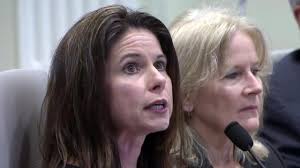 Gov. Pat McCrory appointed a new Republican-dominated Board of Elections after his election in 2012, and that Republican board chose Kim Strach as the new SBOE Executive Director, replacing Gary Bartlett who had held the job for many years. Like any Democratic blogger worth his bile, I was suspicious of Kim Strach and paid close attention to her decisions. I have to admit now, with a newly ascendant Democratic Board of Elections moving irrevocably toward replacing her on Monday, that she's been a good executive director.

Oh, I criticized her for her failure to stop the appointment of Matt Snyder as local director of the Watauga BOE, and I was doubtful she could be wholly independent from her aggressively partisan husband, lawyer Phil Strach (the independence of George Conway from his aggressively partisan wife Kellyanne Conway has rewritten that template), but Kim Strach has shown plenty of even-handedness and even political courage in many matters I have followed since 2013 (the following list not in any chronological order):


The detailing of inappropriate behavior by SBOE member Paul Foley, shortly before Mr. Foley got removed from the board.

The schooling of UNC System General Counsel Thomas Shanahan on what the college "attestation" form required for certifying student IDs for the purposes of voting.

Her refusal to allow Stacey C. "Four" Eggers, working remotely through his brother Luke Eggers as chair of the Watauga BOE, to combine the Boone 1, Boone 2, and Boone 3 precincts into one mega-precinct with a polling location at the Agricultural Conference Center.

Her overruling of Watauga BOE Chair Bill Aceto in the November 2017 municipal elections, when Aceto wanted the Boone 2 polling place at the Legends nightclub. Strach said it had to be in the Student Union.

Her conduct throughout the investigation into balloting fraud in the NC-9 and her examination of witnesses at the February hearing this year.

When Governor Roy Cooper finally regained control of the SBOE, it was an inevitability that Strach would be replaced as executive director, and the news is out this morning that the Democrats on the SBOE will make that move in a teleconference Monday morning.

I'm conflicted about that, given Strach's strong record of performance, and I hope the Democratic majority choose a replacement with professional credentials and no whiff of partisan odor. Nothing less would be acceptable.

Posted by J.W. Williamson at 5/11/2019 08:51:00 AM
Email ThisBlogThis!Share to TwitterShare to FacebookShare to Pinterest
Labels: Kim Strach, North Carolina Board of Elections

Thank you, Jerry. She deserves acknowledgment for a job well done.