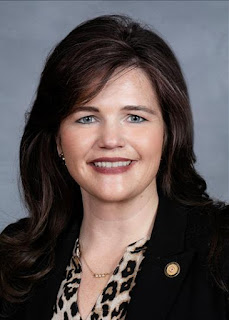 Senator Deanna Ballard (District 45) belongs to the Republican Party. The Republican Party has always preached that local government knows best, is wisest, more frugal, and "Big-Brother" state and national governments need to quit imposing themselves on the wise citizens. That doctrine is preached and rarely followed, especially when some high-ranked Republican dudes attain great power and get to meddling.

So Watauga County State Senator Deanna Ballard has joined up with Phil Berger, president of the Republican Senate and no slouch when it comes to power-grabs, and introduced Senate Bill 674, which will force all school board elections in Surry County -- just Surry -- to become partisan in nature. Ds versus Rs. Meanwhile, for independent candidates ... too bad, so sad.

Ballard thinks -- if she's thought about it at all and isn't just Berger's puppet -- that school boards need a transfusion of the same bile and vitriol that is currently stripping the political paint off the two-party system. She either thinks that partisan labels and partisan marching orders and partisan doctrine imposed from above will be good for the governance of public school boards in Surry County -- but nowhere else in particular -- she either believes that, or she's Berger's dumb tool.

And why just Surry County? If it's such a good thing to do and not just a naked, clumsy, embarrassingly obvious power-grab imposed on the citizens of that one northern-tier North Carolina county? Why?

The three separate school boards in Surry -- representing Elkin City Schools, Mount Airy City Schools, and Surry County Schools -- held a first-time-ever joint meeting in April, together signing a resolution to “oppose any legislation changing the manner of election of any one or more of these boards of education from nonpartisan to partisan.” The Elkin city commission passed a similar resolution.

Deanna Ballard wants to impose not just the state on Surry County, but the machinery of partisan witch-hunting. Just what public education needs!