We're Skeptical But Also Prepared to Be Amazed by Sen. Richard Burr 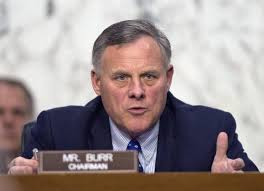 For the first time a subpoena has been issued to a member of the Trump family, to Don Junior, by Senator Richard Burr's Intelligence Committee. Burr's already announced he will not be running for reelection in 2022 when his term ends. He perhaps feels a little freer to exercise those atrophied personal integrity muscles.

Because ... evidently (and according to the Mueller Report) Don Junior lied to Senator Burr's staff when he appeared for an interview last year, lied about the June 2016 Trump Tower meeting with the Russians. According to the reporting of Ashley Parker et al., "...the Intelligence Committee has been trying to schedule a second interview with Trump Jr. for weeks, according to people familiar with the negotiations .... As negotiations over Trump Jr.’s testimony dragged on, committee Chairman Richard Burr (R-N.C.) became increasingly frustrated and believed that Trump Jr. was defying the committee’s authority and not honoring his original agreement...."

Increasingly frustrated and pissed enough to issue a subpoena to the Crown Prince. Impressive.