Invitation to an Impeachment 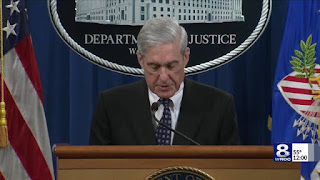 Did you see Bob Mueller? He spoke about as clearly as a human being (who doesn't intend to be personally politicized) can speak: "Congress, it's your responsibility to deal with a lawless president."

"...if we had had confidence that the president clearly did not commit a crime, we would have said so."

So much for Twitterman's claim that the Mueller Report completely exonerated him. But you knew he was lying about that from the git-go, didn't you?

"And I will close by reiterating the central allegation of our indictments, that there were multiple, systematic efforts to interfere in our election. And that allegation deserves the attention of every American."

Vladimir Putin wanted Trump. Putin worked to get Trump. Putin got Trump. Trump was thrilled with the effort and the outcome, but he began to cover it all up as soon as the facts began to leak.

The House of Representatives has its mandate, underscored by Mueller yesterday: "It's your responsibility to do something." They're doing it. Multiple investigations. Multiple subpoenas. The truth will out. You can count on it. Whether it produces a formal impeachment before November 2020, or piles up a mountain of evidence of Trump's criminal contempt for our Constitution, there should be no voter in the dark about the character of the man in the White House.