Whaaa! A Republican Who Not Only CAN Read But Who Did Read! 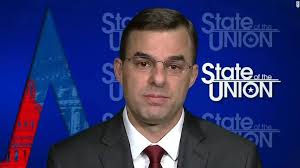 Rep. Justin Amash, a very conservative Republican who represents the 3rd District of Michigan, read the Mueller report -- all of it as redacted by A.G. Barr -- and made this string of comments below on Twitter yesterday. Beginning about 24 hours ago, Amash wrote what amounts to what surely will become an historical document -- a declaration of logic and principle now missing from the makeup of (pretty much) all other Republican members of Congress (Lindsey Graham, we're especially looking at you).

You've probably seen the 1st comment in this string, but have you read the whole? And can you appreciate the fortitude it took to write it?


Here are my principal conclusions: 1. Attorney General Barr has deliberately misrepresented Mueller’s report. 2. President Trump has engaged in impeachable conduct. 3. Partisanship has eroded our system of checks and balances. 4. Few members of Congress have read the report.

I offer these conclusions only after having read Mueller’s redacted report carefully and completely, having read or watched pertinent statements and testimony, and having discussed this matter with my staff, who thoroughly reviewed materials and provided me with further analysis.

Barr’s misrepresentations are significant but often subtle, frequently taking the form of sleight-of-hand qualifications or logical fallacies, which he hopes people will not notice.

Contrary to Barr’s portrayal, Mueller’s report reveals that President Trump engaged in specific actions and a pattern of behavior that meet the threshold for impeachment.

In fact, Mueller’s report identifies multiple examples of conduct satisfying all the elements of obstruction of justice, and undoubtedly any person who is not the president of the United States would be indicted based on such evidence.

Impeachment, which is a special form of indictment, does not even require probable cause that a crime (e.g., obstruction of justice) has been committed; it simply requires a finding that an official has engaged in careless, abusive, corrupt, or otherwise dishonorable conduct.

Those who haven't read the Mueller Report have no right to attack Rep. Amash's conclusions, especially the Non-Reader in Chief. (You haven't read it either, have you, Virginia Foxx?)

Twitterman went full schoolyard bully this morning, calling Amash a "loser" and "a total lightweight who opposes me and some of our great Republican ideas and policies just for the sake of getting his name out there through controversy." No attempt in that juvenile rejoinder to dispute Amash's logic and his understanding of the Constitution.

"Amash, who has been described as the 'new Ron Paul' due to his Libertarian beliefs, has broken ranks with the Republican party before — and especially against Mr. Trump, whom he did not endorse in 2016. Earlier this year, he was one of 14 Republican representatives who tried to override Mr. Trump's veto over an emergency declaration for the border wall. In March, Amash did not rule out running for president as a Libertarian in 2020." [Caroline Linton]