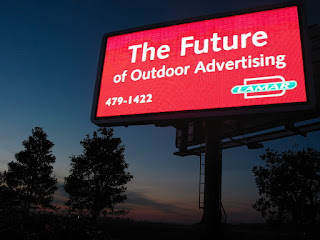 The billboard industry in North Carolina has tried at least three times in recent years to get massive new power to override local laws and local governments and put their massive signs pretty much anywhere they want to. They're trying again this year with simultaneous bills in NC House (H645) and Senate (S534), "Revisions to Outdoor Advertising."

The industry's revisions (and have no second thoughts about who wrote or dictated the language of this bill) will allow more tree cutting around billboards, force taxpayers to pay billboard companies more to remove existing signs for public works projects, and allow billboards to be relocated from one part of a community to another even if local ordinances prohibit them. Worst of all, the bill will unleash a new scourge, digital billboards, the garish lighted eyesores the industry wants to replace their old billboards with.

Sen. Deanna Ballard of Watauga is a secondary sponsor of the Senate bill. You gotta ask yourself, on those occasions when Sen. Ballard is pushing some new law, what's in it for Franklin Graham? Dunno. Why is unleashing the billboard industry -- to override existing municipal laws -- of such burning interest to Deanna Ballard?