Sticking His Pixy Nose Into Other People's Business Since 2011 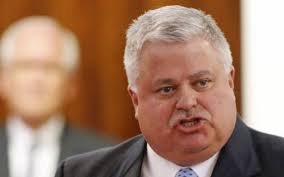 Tom Apodaca, the powerful Republican senator in Raleigh representing Buncombe, Henderson, and Transylvania counties, has proposed a bill in the General Assembly to roll back Democratic electoral control of Asheville city government. Apodaca proposed a redistricting scheme to throw five of seven currently elected Democrats into races against each other. (Taking bets currently at 50-to-1 on whether the G.A. passes it.)

Apodaca's "cover" -- his explanation -- for such radical partisan gerrymandering ... business interests on the south side of Asheville don't have enough representation on city council, and they're complaining. (It's not like Apodaca would ever turn a deaf ear to the pleas of constituents!)

Asheville Citizen-Times: "The move has the backing of a majority of one, Apodaca. None of Asheville’s elected officials or the four other lawmakers who represent parts of the city, all Democrats, were on board with the proposal."

On representation on the city council for South Asheville: "...there’s no argument that South Asheville should be represented. But there’s nothing on the books that says a South Asheville resident can’t be elected to office. All it takes is a good candidate with a good platform running a good race."

As we all know from five years of Republican over-lordship, good platforms don't exist for them. Only regressive, repressive, backward, and radical platforms exist in the contemporary Republican Party of North Carolina.

Punishing his constituents seems to be his major goal. Government by consensus ? Not a chance! Government by vindictiveness is more his style.