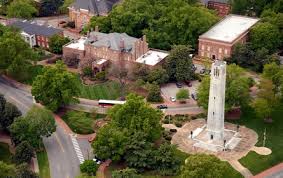 In 2012, there was an Early Voting site on the campus of NC State University in Raleigh, just like at AppState. Then Gov. Squishy took office, and every Board of Election in the state came under the partisan control of Republicans. So in the 2014 elections, there was -- surprise! -- no Early Voting on the NC State campus.

The passivity at NC State may be about to end. There will be a push next week in the Wake County Board of Elections to reinstate Early Voting on the Raleigh campus. Everything will depend on how strong and committed the Democratic member of that county Board of Elections is. If he votes to go along (to get along) with his Republican brethren, who'll likely deny a campus site, then the whole push sinks.

If the Democratic member votes "NO" and submits his own Early Voting plan, then the entire decision falls to the State Board of Elections, which has already been successfully sued for disenfranchising college-age voters and who might not want to be sued again.

CRACK IN THE WALL?
There is recent precedent for one of the two Republicans on the Wake Board of Elections breaking ranks and voting with the Democrat for restoring an Early Voting site in a predominantly black Raleigh neighborhood, so there's always the possibility that lightning could strike again....

Naw, won't happen. We feel sure that Republican board member was taken to the woodshed sufficiently to beat any fairness out of his synapses.

Posted by J.W. Williamson at 6/23/2016 09:27:00 AM
Email ThisBlogThis!Share to TwitterShare to FacebookShare to Pinterest
Labels: early voting in North Carolina, North Carolina State University, Wake County Board of Elections