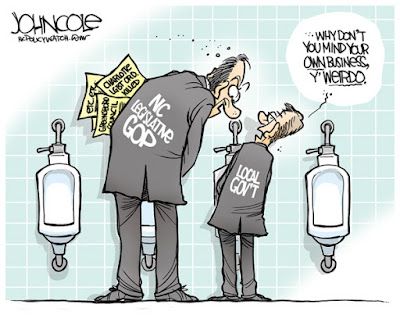 And since HB2 specified no penalty for violation of the law, there's not much The Guv or his cohorts in the NC General Assembly can do about it.

Already ahead of the ignore-HB2 movement was political hack and new head of the University of North Carolina system Margaret Spellings, who told a federal court last month that she would not be enforcing HB2 in the UNC system.

McCrory induced his official spokesman to sputter and spit at the press following the CMS announcement. They're purposely breaking state law, said The Guv's spokesman, his voice rising two octaves. He was hoping that he might get any reaction beyond a yawn.

McCrory must have it out for Charlotte. He said NOTHING to Margaret Spellings at UNC, who is also following Federal law and not enforcing HB2.

The NC GOP's new spokesperson makes tasteless jokes about transexuals on her Facebook feed, so the party seems to be doubling down on the hate front.