Bill Aceto, Chair of the Watauga Board of Elections, wrote an identical letter to the president of the Appalachian State University student government, suggesting strongly that students not even ask for Early Voting in the ASU student union. Don't even think about it.

To repeat the obvious, the real reason Aceto and the Watauga Republicans want to rule out the student union is because it was the most popular and heavily utilized Early Voting site in the entire county -- by voters of all ages who reside all over the county -- during the March primaries. The Republicans are not about to let that happen again. Over their dead bodies. 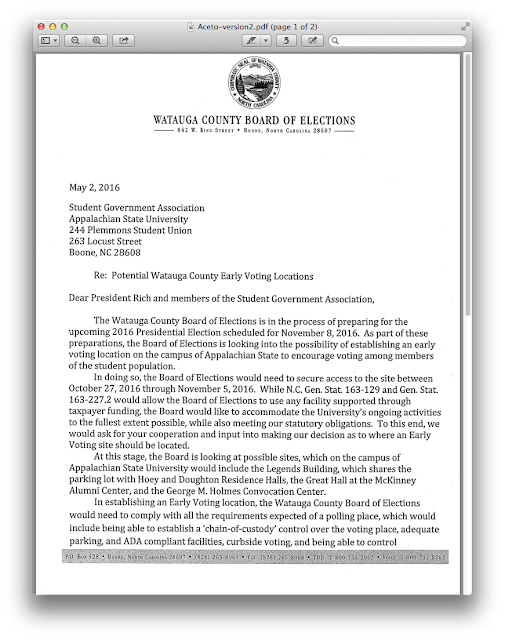 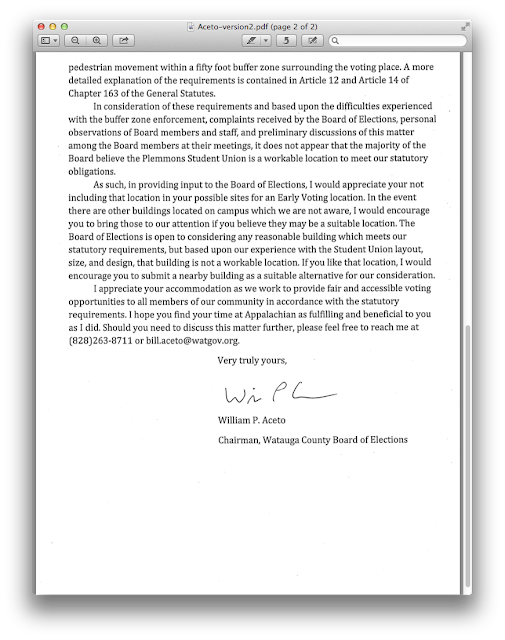 The student government should forward this letter to the Justice Department, highlighting that Aceto has been intimidating student voters in violation of the 26th amendment and that this intimidation has been part of a pattern.

"In cases where intimidation, coercion, or threats are made or attempts to intimidate, threaten or coerce are made to any person for voting or attempting to vote, the Department of Justice can consider whether there is federal jurisdiction to bring civil claims or criminal charges under federal law. Depending on the nature of the allegations, they may fall into the jurisdiction of different parts of the Department. If you have information about allegations of intimidation, please contact us."

You can't make this stuff up

I say open up the Convocation Center for voting!!

Anon 8:35 - Absolutely! It's impossible to get into for elderly voters, and there's not really convenient parking, or a good way to set up a buffer zone, plus the BOE will have to pay ASU for the revenue lost because the site has to be secured 24/7 and it won't be available for sporting and other events already scheduled there. Sounds like just the place to move voting to.

The Republicans are so far removed from "conservative ideals" that it's astonishing. Their hatred of this country - of all parts of the Constitution outside of the 2nd amendment - of minorities, women, immigrants - is unAmerican to the core. They are seeking a theocracy in North Carolina. Franklin Graham rules the Republican officials. They show nothing but disdain for citizens of this county. Time to vote out the NCGOP in the fall.

Yes, PLEASE contact the Justice Department. The Board of Elections Republican members need to be reined in.