Turns Out, Governor Squishy Will Fit Going Down That Drain 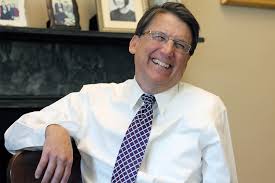 So this happened. The U.S. Department of Justice informed the governor that HB2 violates federal civil rights laws, and North Carolina has until Monday to announce that it will not attempt to enforce the law.

Not that Phil Berger and Company ever intended to enforce it, or had the wherewithal to enforce it. It's unenforceable, at least the who-uses-what-bathroom provision. The rest of it was typical Raleigh-dictating-to-cities what they can do/say/think about any issue carrying the odor of progressivism. Oh, and then there was the payout to the NC Chamber of Commerce, guaranteeing no businesses can be sued for being dicks and no city can raise the minimum wage.

How did McCrory react to the DOJ letter? He spoke at an NC Chamber of Commerce event soon after receiving the Justice Department letter, and he immediately chose the path of every Southern segregationist from decades ago, blasting the meddling, over-reaching bullies in the U.S. Gubmint who intend to force your baby girls into locker rooms with perverts.

So he's going down that drain, whining all the way.

Will it still work when the target group is the smallest and weakest segment of our population, trying to find their identity and keep their balance in this precarious world?

Whatever else happens, Governor McCrory has found his identity, or took what was thrust upon him by smarter and more cynical men, and he will go down in state history as the huge, hapless tool he is.

Posted by J.W. Williamson at 5/05/2016 08:05:00 AM
Email ThisBlogThis!Share to TwitterShare to FacebookShare to Pinterest
Labels: homophobia, Pat McCrory

When all is said and done, I don't think McCrory would be able to get a job as a dog catcher.

I'm sure Duke Energy will give him some kind of useless position to keep him busy and hidden away from embarrassing public view.