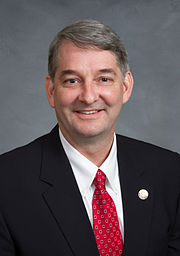 NC Senator Eldon Sharpe "Buck" Newton III made some headlines this week at a pro-HB2 rally in Raleigh that was characterized yesterday on the editorial pages of the Charlotte Observer as a hate-fest worthy of the darkest days of the 1950s.

Buck Newton wants to be Attorney General of North Carolina. Of such are nightmares made.

Buck Newton graduated from Appalachian State University with a political science degree and went immediately to work for Jesse Helms. Now he's working to rid North Carolina of difference and drive us down the hole that Jesse Helms started digging so many decades ago.

In response to Buck's "coming out" at the HB2 rally, this got posted on Facebook:


I knew Buck Newton when he was in college. He was always very opinionated, angry, looked down on others, always saw things in simple terms, always quick to jump to conclusions, always claimed things were "common sense". He was always very judgmental and used bully tactics on others to make his opinion appear correct. He was always full of confidence based on simple, black and white views of the world. Several of us thought he was an idiot because of his lack of ability to see and understand what was beneath the surface of issues. This bill/law sounds exactly like something college-kid Buck would do. Apparently, he has not grown much. There are many smart and wise people in North Carolina who see God's creation as it truly is - a very complicated marvel, so it is absolutely shocking that such a person of low understanding could rise to such power based on such a superficial foundation. Shocking. At one point in time, the earth being flat was "common sense", blacks being inferior was "common sense"... And, here we are... again.


Supporters of House Bill 2 have dubbed it the Bathroom Bill, as if the legislation isn’t much broader than that, as if it doesn’t take North Carolina back to the days where discrimination is an accepted way of life. The rest of us have to decide if that is OK.

It ain't okay, and there's something bad wrong with Buck Newton.

I was in college with Buck up here, and he was always a very level headed guy. He had an easy smile and was fun to be around. Shouldn't we want an App Grad in elected office?

Dear anon 7:54 - not if his 'level-headedness' doesn't extend to protecting the rights of EVERYone in the state. I don't give a tinker's heck where someone graduated if they're the better person for the job...and I don't believe Mr. Newton is.

" ...opinionated, angry, looked down on others, always saw things in simple terms, always quick to jump to conclusions..."

No wonder he went to work for Jesse Helms.