Bill Aceto Is His Name, Voter Suppression Is His Game

Bill Aceto, Republican Chair of the Watauga County Board of Elections, wrote a letter to the presidents of Appalachian State University and Caldwell Community College which is unusually revealing about Mr. Aceto's continuing efforts to put stumbling blocks in the path of student voters.

1. In his letter (below), Mr. Aceto speaks for the Board as though discussions and votes have been held. We are told that he is acting and speaking unilaterally, or else the two Republicans have been meeting privately without the Democratic member.

2. Mr. Aceto says the Board is looking at the possibility of establishing Early Voting on either the ASU or the Caldwell Community College campus. As far as we know, there is still a standing court order that an Early Voting site must be placed on the ASU campus. We would welcome a site on both campuses.

3. Mr. Aceto lists three sites that the Board is considering. All three are on the far edges of the campus. He does not list the Student Union, where the site was located for the March primary. He goes further on page 2 of his letter and explicitly rules out the ASU Student Union: Don't even think about recommending the Union for Early Voting, he says.

4. Mr. Aceto justifies ruling out the Student Union by alluding to numerous complaints about the "buffer zone." An examination of the "complaints file" in the Board of Elections office reveals no complaints -- zero -- dealing with the Early Voting site in the Student Union in the 2016 primary election. There were complaints about Election Day voting at the Legends site, mainly about how long and slow the lines were (which is on Mr. Aceto and his administration of voting in this county).

5. It is clear that Aceto, his boss "Four" Eggers, and the rest of the colluding power structure in the local Republican Party will continue to flaunt their subversion of Judge Donald Stephens' order from 2014 to make voting accessible to ASU students ... until the entire power structure is changed in the state of North Carolina. 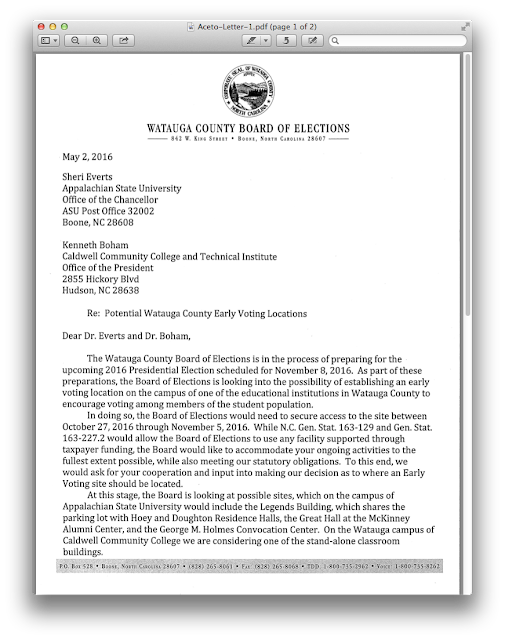 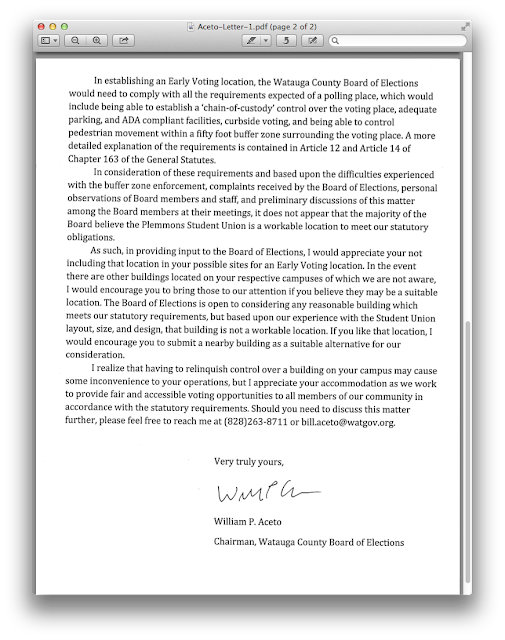 Here's to hoping that the good people of Watauga County do everything possible to vote out people who decide to make voting harder and harder to do. I cannot believe how unAmerican the Republican party has become. Vote out NCGOP this November. That is to say, if we're even allowed to vote any more.