Watauga Board of Elections: Potholed 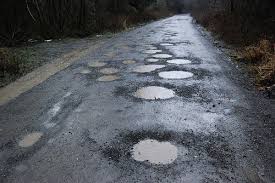 See if you can decipher his reasoning:

“On the surface," opined Eggers, who knows a thing or two about surfaces, the requests from the towns of Blowing Rock and Boone for Early Voting sites "sounds like a great idea. But the more I thought about it, what got me was we are reaching out to the candidates and letting them have a say. It would be the same thing if we went to the general election and asked the county commissioners, ‘Where do you want a site?’ ” (emphasis added)

"We are reaching out to the candidates"? What? Minority member Stella Anderson wrote the town managers of all the county's municipalities and inquired about their preferences for early voting sites. Is Eggers suggesting that the responses that were received were dictated by candidates running for reelection?

Now there's a man who's foremost concern is "integrity" -- "Eggers said he is trying to keep the integrity of the elections" -- never mind the puppet strings that his big brother "Four" Eggers has danced him on since August of 2013. Do the two Mr. Eggers think we don't see through them? Do they think their steadfast scheme to suppress the vote of ASU students isn't done at the behest of certain candidates, or at least to benefit their prospects?

In denying an early voting site -- once again -- on the campus of Appalachian State University, Eggers and Aceto are defying the Superior Court judge who ruled last year that their previous denial in 2014 was a violation of constitutional rights and the principles of equal treatment under the law.

In denying an early voting site in Blowing Rock, which they were eager to grant in last fall's general election and are now suddenly totally opposed to, Eggers and Aceto are proving that their foolish consistency has become the hobgoblin of their little partisan minds (forgive me, R.W. Emerson!).

Because the vote on the BOE this evening was 2-1, there'll be an appeal heard by the state Board of Elections (now minus member Paul Foley). Last year the SBOE sided with Eggers & Aceto, and what came of that? They got sued and lost, and the court forced the placement of an early voting site in the ASU Student Union.

Eggers & Aceto are going down that bumpy road again. That's some swell instruction that Four Eggers is forcing on his little brother Luke and on his other tool, Bill Aceto.